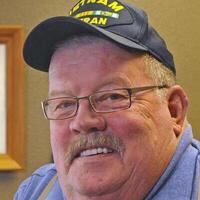 View the service livestream at the following link: https://youtu.be/yz2V4XVnzQE

Dennis L. Vernon was born in Ashland, Ohio on November 30, 1946 to Norman and Mildred (Skari) Vernon, the oldest of five children. The family moved to North Dakota when Dennis was young. They eventually settled in Bismarck, where Dennis graduated from Bismarck High in 1964.

After high school, Dennis enlisted in the Navy. He served two years on the U.S.S. Haleakala off the coast of Vietnam as a radioman, and then in Alaska and Taiwan, before being honorably discharged in 1970. His military service was Dennis’s greatest pride, and he inspired his oldest son, Owen, to join the Marines.

Dennis was also a devoted family man. He married Karen Dockter shortly after his discharge from the Navy, and the couple had two sons: Owen Thomas, born in 1973, and Christopher Jon, born in 1975. While Karen and Dennis divorced, they remained friends through the later parts of their lives until Karen passed in 2018.

Newly single and with his sons in tow, Dennis moved to Bismarck in 1983, where he met LaVerne Nitschke in a support group. They married in April 1985, making a home in Mandan with Owen, Chris, and LaVerne’s son Chad. The boys grew up fishing, golfing, and hunting with Dennis. Dennis provided his famous Spritz cookies to many extended family gatherings. His family will remember his loud laugh, his tenacious love, and his devoted presence at his nieces’ and nephews’ basketball games, concerts, and events.

Dennis worked in the newspaper business for 12 years all across North Dakota before settling into his career in insurance and investments, first at Lutheran Brotherhood and then at Thrivent Financial. Dennis excelled in his work, providing advice with good humor to his clients, many of whom became close friends, for 20 years before he retired in 2017.

The church played a pivotal role in Dennis’s life from a very young age. Dennis was a member of First Lutheran Church for years. Dennis also lay-pastored in Lutheran churches across the state, happy to serve whenever called upon, and served on the board of Camp of the Cross.

He is preceded in death by his parents Norman and Mildred, son Chris, sister Dorothy Longmuir, niece Tiffany Longmuir, ex-wife Karen, various aunts and uncles, and his father-, mother-, brother-, and sister-in-law.

To order memorial trees or send flowers to the family in memory of Dennis Vernon, please visit our flower store.