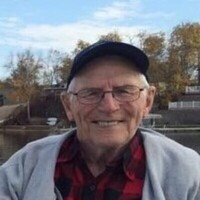 A celebration of life will be held in Rolette, ND in April. Date and time to be determined.

Donald Clarence Anklam was born on January 19th, 1931 in Rolette, North Dakota. He grew up on the Anklam farm which his father homesteaded after immigrating from Germany. After graduating from Rolette High School, he farmed with his brother Charles and in the winters worked as an electrician’s assistant for R&O Construction.  This work was the construction of the US Customs Stations along the Canadian border; he had a dream of buying is own farmstead.

On September 19th 1959, he married the love of his life Kathleen Brennan. Don and Kathy had two daughters, Karen and Wendy. On April Fool’s Day, 1964 they purchased a farm one mile south of Rolette where they lived until 2012. There was always a project on the farmstead; which involved upgrading the farmhouse, barn, corrals, granaries, outbuildings and the beautification of the farmyard. Donald was a steward of the land, rotating crops and implementing many improvements that the soil conservation office recommended. Cattle and sheep were also raised on the farm.

Donald loved to travel the United States, he had a love of the Southwest and loved to have conversations with people he met while traveling. He had the gift of “gab,” a gleam in his eyes and loved LIFE. Donald loved the music of Johnny Cash, Bob Wills and the Texas playboys. He enjoyed fishing and snowmobiling. After retirement he enjoyed coffee at the mall, breakfast on Saturday mornings and playing cards.  He restored three antique Minneapolis Moline Tractors and numerous generators. He had a large collection of toy tractors which his grandchildren loved.  His grandchildren held a special place in his heart. He took annual birthday trips between Minneapolis and Bismarck four separate times a year for each of them till they reached their eighteenth birthday. In 2018, he became a great-grandfather.

Donald was preceded in death by his Mother and Father; brother, Charles and loving wife Kathleen.

To order memorial trees or send flowers to the family in memory of Donald Anklam, please visit our flower store.