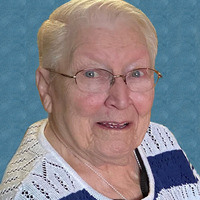 Visitation will be held from 6 to 7 p.m. Monday at Parkway Funeral Service, 2330 Tyler Pkwy, Bismarck. A rosary will begin at 7 p.m.

Donna was born January 1, 1933, to Leonard and Helena (Raehsler) Naumann on the family farm near Temvik. She attended eight years of school at Highland Acres Country School and graduated from Linton High School in 1950.

On August 1, 1953, Donna married Edwin Lacher at St. Anthony’s Parish in Linton. She worked for the Highway Department, sold Avon, North Dakota Food Retailers and was the Bingo Lady at the AmVets.

Her hardest and most rewarding job was raising her family. She especially enjoyed spending time with her grandchildren and great-grandchildren. Donna enjoyed playing the piano, singing with the Sweet Adelines and participating for 35 years in a bowling league.

Donna’s Catholic faith was very important to her. She was a charter member of the Church of Corpus Christi and was involved in the St. Paul’s Guild.

To order memorial trees or send flowers to the family in memory of Donna Lacher, please visit our flower store.