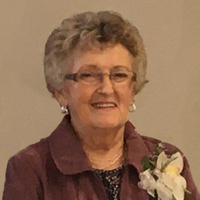 Visitation will be held from 5 to 7 p.m. Tuesday, March 15 also at Zion Lutheran Church with a prayer service starting at 7 p.m.

Doris Elaine Brandt-Thiel-Eiseman was born September 28, 1940, to Edwin and Leontina (Schock) Brandt in Kramer. She was baptized and confirmed at the Peace Reformed Church in Upham. She later became a member of Zion Lutheran Church, Bismarck, in 1960. She graduated from Kramer High School in 1958, attended Bismarck Junior College and graduated from the Secretarial Program in 1959.

She was employed at Provident Life Insurance Company from 1959-1961. She then started in the automotive industry as office manager, first with Corwin-Churchill Motors for 20 years, then with Eide Ford for a decade. She then went on to work at Cedric Theel Inc. for three years before finishing her career at West Central Human Service Center where she worked as an Administrative Assistant from 1994 until her retirement in November, 2005.

Doris married Wesley E. Thiel on June 25, 1960. Together they had three sons, Brian, David and Timothy. They were involved in Scouting while their sons were active. They did a lot of camping with the boys and vacationed in several National Parks. Wesley passed away on March 7, 1997.

She was married to Elmer Eiseman from November 23, 2001, until he passed away on May 14, 2020. Doris and Elmer took several bus trips with friends, visiting places including Branson, Nashville, San Diego, Mesa, the East Coast and an Alaskan Cruise.

Doris taught Sunday School and was active in the Lutheran Women’s Missionary League in which she held several offices. Upon retirement, she became a Financial Director on the Board of Thrivent Financial and served as a volunteer for a number of years.

Among her favorite pastimes were reading, gardening, baking, garage sales and camping. Her greatest joys were her two grandchildren, Kalie and Gage, whom she loved very deeply. They spent lots of time with their “Nana” making cookies for the holidays.

To order memorial trees or send flowers to the family in memory of Doris Eiseman, please visit our flower store.