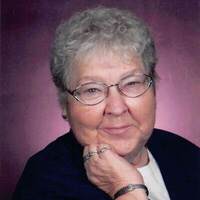 Burial will be held 3 p.m. Monday at the North Dakota Veterans Cemetery, Mandan.

Doris was born May 29, 1936 in Dawson, the daughter of Christ and Mary (Graf) Dewald. She was raised and educated in the Dawson area, graduating from Dawson High School. Doris then attended Valley City Teacher’s College, and after, taught in Crystal Springs in a one room schoolhouse for two years.

Ferdinand Hagel walked into the Dawson family grocery store “shoppin’ for a date.” Doris caught on fast and the two began dating before he joined the military. Following his discharge, the two were married June 5, 1955 in Dawson.

Doris worked for 25 years at the Garrison Dam National Fish Hatchery and retired in 1995. After retiring, they sold their home in Pick City and lived full time in their RV. She loved camping and traveling. One summer, she and Ferdinand were hosts in Yellowstone National Park. Later, their travels brought them to Arizona where they settled for the winter months and spent the summers back in North Dakota seeing family and friends.

Her passion while working was sewing clothes for the grandkids. Every year, the grandkids received a box of clothes from grandma. It became the present that everyone was excited to open. In retirement, she became an avid quilter, and that became the gift everyone looked forward too.

Doris was preceded in death by her parents; sister Wynola; brothers Raymond, Gordon, and Curtis; and grandson Joseph.

To order memorial trees or send flowers to the family in memory of Doris Hagel, please visit our flower store.