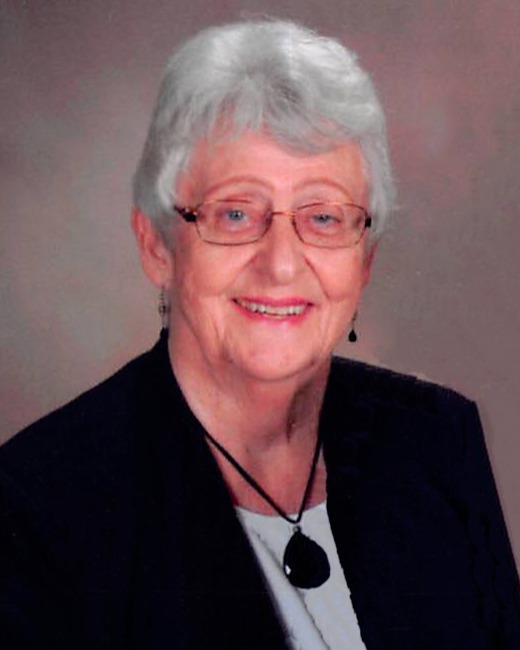 Doris Elaine Wolfe, 88, passed away peacefully with her daughter by her side on Friday, October 21, 2022, at Edgewood Village, Bismarck, ND.

Doris was born June 24, 1934, in Temvik, ND, to Ben and Alma Burkhardt. She attended school in Temvik and graduated from Temvik High School in 1952. After graduation, she became employed at First National Bank of Linton.

Doris married Howard Wolfe on September 17, 1953, in Linton. They lived in Zeeland, Ellendale and Upham, ND, before settling in Bismarck in 1958. She was employed at Dakota National Bank until the birth of Pamela in 1960. With the exception of living in Helena, MT, from 1963 to 1967, Bismarck remained her home. She retired as a teller from Norwest Bank in 1986 and began caring for her grandchildren.

Her granddaughters, Jessica and Haley, were a very important part of her life. She spent many quality hours with them and attended most of their programs, concerts and athletic events. Doris was very proud of the young women they had become.

Doris will be deeply missed and is survived by her daughter and son-in-law, Pam & Syd Stewart of Bismarck, ND; granddaughters and husbands, Jess & Eric Koehler of Andover, MN, and Haley & John Pien of Hugo, MN; four great-grandchildren, Taylor, Brandon, Rowan and Axl; sister, Arlyss McCrory; sister-in-law, Mary Burkhardt; and many nieces and nephews.

The family would like to thank Edgewood Village for taking such good care of Doris for the past six years and Caring Edge Hospice for their five months of compassionate care.

Doris was a charter member of Good Shepherd so memorials may be addressed to Good Shepherd Lutheran Church, 106 Osage Ave, Bismarck, ND 58501.

To order memorial trees or send flowers to the family in memory of Doris Wolfe, please visit our flower store.