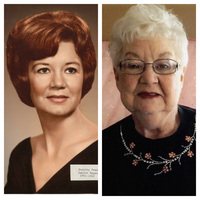 Dorothy Mavis Preabt, 91, Bismarck, died December 29, 2020, surrounded by family at Edgewood Village where she resided the past five years.

Dorothy (Dot) was born on March 16, 1929, on a farm south of Beulah, ND.  She was the first of nine children of Frank and Freda (Buchmann) Fetch.  Her family moved to Bismarck when Dorothy was 14.  She completed the eighth grade in school, and later attained her diploma by completing the GED, an accomplishment of which she was deservedly proud.  She worked at Sweetheart Bakery, the Dixie Shop, Bismarck Theater, Germans From Russia, and completed a long career as office manager for the Teamsters Union.  While working as a ticket cashier at the Bismarck Theater, she met Joe Lewis, the heavyweight boxing champion of the world, and was thrilled to shake his hand.

Dorothy married Harley Preabt on June 12, 1948, in Mandan, ND.  They had two sons and a daughter; Terry (Bernadine), Monte (Shirley), and Darlyn (Jerry) Kunz.  Dorothy and Harley and the children loved camping and traveling.  Dorothy was an excellent bowler, and traveled often to state and national tournaments.  She and her mother were active in the Women of the Moose, a unit of Moose International, an organization which is dedicated to helping those in need.  Dorothy served as Senior Regent in 1961-62.

Dorothy and Harley were members of the Bismarck Eagles Club and Church of St. Anne.  They both spent many hours volunteering at the Bismarck Senior Center.  Dorothy also served on the Board of the Burleigh County Council on Aging.

She was a person of many talents.  Dorothy was creative and produced many beautiful quilts, afghans, and craft items.  While a resident at Edgewood Village, she participated in art activities and playing cards.  She was often found outside her apartment because she liked to be among other people and part of the action of whatever was going on.

Dorothy was outgoing, loved socializing, and easily made friends wherever she went.  She liked to entertain and enjoyed setting a beautiful table.  Family was all important to her.  She was keenly interested in family history and traced family roots through Germans from Russia and incorporating memories and stories from  relatives.  She loved family gatherings, whether it was a small group for dinner, a sing-along with her Dad and brothers playing guitars, or a large family reunion.  She will be deeply missed at the Buchmann family reunions, which she was proud to say she initially organized.

Dorothy loved cats, and had to separate from her beloved Miss Kitty when she entered Edgewood.  However, she could not give Miss Kitty up to just anyone.  Her brother and sister-in-law adopted Miss Kitty (now Molly) and Dorothy was happy to see her occasionally and know she is still part of the family and is being well cared for and loved.

Memorials may be made to Bismarck Senior Center or a charity of your choice.

To order memorial trees or send flowers to the family in memory of Dorothy M. Preabt, please visit our flower store.