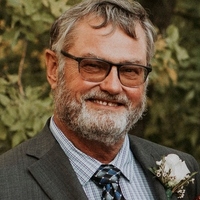 Douglas Lee Boknecht, 68, Bismarck, passed peacefully at his home on Friday, Feb. 4, 2022, with his loving family by his side. Funeral services will be held 11 a.m. Wednesday, Feb. 9 at Good Shepherd Lutheran Church, 106 Osage Ave., Bismarck.

Visitation will be held from 4 to 6 p.m. Tuesday at Eastgate Funeral Service, 2302 E Divide Ave., Bismarck. Visitation will continue from 9:30 to 11 a.m. Wednesday at the church.

As livestream of the service will be available for viewing at Good Shepherd Church's Facebook website: https://www.facebook.com/goodshepherdbismarck

Doug graduated from Mott-Lincoln High School in Mott in 1971 and served as class president. He graduated from University of North Dakota (UND) with a bachelor’s in psychology in 1975. While at UND, he met the love of his life, Ava, through mutual friends. After graduating from UND, Doug and Ava were united in marriage on October 29,1977, in Mott. Doug started his social work career with Benson County Social Services and then moved to Northwest Human Service Center in Williston. After a few years, Doug decided to pursue graduate studies. Doug and Ava moved to Philadelphia, Pennsylvania, for Doug to complete his graduate work at the University of Philadelphia. Ava worked diligently to support Doug throughout graduate school. They thoroughly enjoyed the city life Philadelphia had to offer but missed the family and friends back home. After graduating with his master’s degree in 1983, Doug and Ava moved back to North Dakota to pursue lifetime careers in social work.

After moving back from Philadelphia, Doug worked for North Central Human Service Center in Stanley. In 1990, Doug and Ava moved to Devils Lake, where they established their home of 27 years, and raised their children, Christian and Marina. Doug served as a clinical supervisor and regional director at Lake Region Human Service Center, where he worked closely with the Spirit Lake Nation. He was especially proud of his contributions to combat mental health and substance use disorders and was gifted a star quilt as a sign of appreciation. Doug finished his social work career serving as a Special Projects consultant for the North Dakota Department of Human Services in Bismarck. He was a dedicated servant leader and happily retired in 2019.

Growing up included hunting, fishing, and enjoying life with his many friends. Doug was an avid storyteller, especially around his hand-made fire pit at the Mott farm. Each story was filled with plenty of animation as he relived the many shenanigans of him and his friends. He was also an enthusiastic UND Sioux hockey fan. Additionally, Doug thoroughly enjoyed reading. He would easily read several sci-fi novels in a week and often asked the librarians to order books from other towns. Other hobbies include being the announcer for the many home hockey games of his children, fishing, gardening, cooking, collecting antiques, photography, Netflix, making homemade wine, and spending time on his family farm in Mott.

The farm in Mott was certainly a second home. Many years were spent caring for the land such as planting thousands of trees, cleaning out shelter belts and preparing for the next hunting season. Doug was the best shot for pheasant hunting. His nickname was “Bang Bang Boknecht.” He only started missing on the occasion when his glass lenses became thicker later in life. Doug had a knack for persuading others into helping with his many projects around the house and on the farm, making each task seem like an exciting new opportunity.

Doug loved his family. He would spend a week looking through his large collection of cookbooks to find the perfect new recipe to create. He supported his family and attended every sporting activity, event and milestone of his children and wife. He looked forward to enjoying his well-deserved retirement and making new memories with his family and fur-grandchildren.

He was preceded in death by his parents, John and Martha (Kuehn) Boknecht; his in-laws, Art and Edith Schmidt; infant sister, Mary; and nephew, Toby Mock.

Doug's presence will be deeply missed by everyone who knew him. Although he is no longer with us, we are reminded every day that his memory will live on.

To order memorial trees or send flowers to the family in memory of Douglas "Doug" Lee Boknecht, please visit our flower store.