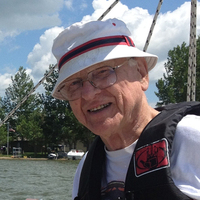 Dr. Marlin John Elof Johnson passed into the arms of his Heavenly Father on Oct. 26, 2021 at the age of 98. He was preceded in death by his wife of 62 years, Lois “Peggy” Johnson, the love of his life. Funeral services will be held at 10:30 a.m. Saturday, Oct. 30 at Lutheran Church of the Cross, 1004 E. Highland Acres Road, Bismarck. The service will be livestreamed on the church’s website.

Visitation will be held from 5 to 7 p.m. Friday with a prayer service to follow at 7 p.m. at Parkway Funeral Service, 2330 Tyler Pkwy, Bismarck.

Out of consideration for all of the guests, the family requests masks be worn at both events.

Born in Bristow, Nebraska, on November 11, 1922, to John W. and Esther Johnson, Marlin was raised on a farm which his Swedish immigrant father purchased because of its close proximity to a one-room schoolhouse which Marlin and his six siblings attended. Marlin first saw Peggy, the Lutheran preacher’s daughter, on a trip into town and later claimed “it was love at first sight.” They dated throughout high school and college and married in 1944.

Marlin attended North Park College in Chicago and graduated from medical school at the University of Nebraska at age 22. A WWII veteran, Marlin served in the Army Air Corps and reserves, retiring with the rank of Captain. After the war, Marlin completed his residency in internal medicine and moved his young family to Bismarck in 1951 to join the Quain and Ramsted Clinic (now Sanford) where he practiced medicine for 51 years. A board-certified internist, he was made a partner of the clinic in 1966. He also served as Medical Director of Provident Life Insurance for a number of years.

He was a devoted husband and father and the Johnson home was always filled with love, laughter, and music. Music lessons were always a priority, and Marlin loved listening to his children sing – especially the Christmas carols Peggy composed - and play various instruments. Marlin had a rich bass voice himself and was a devoted opera fan.

Marlin’s support of missions took many forms. He became involved with Young Life, a Christian ministry for youth, when it was first started in Bismarck in the 1970’s and he saw what a difference it was making in lives, including that of his own daughter, Marcia. He went on to serve on its national and international boards.

Marlin and Peggy supported Christian missionaries throughout the world financially and made numerous trips to visit them, including trips to Europe, Africa, South America, China, Thailand and Laos. In 1993, Marlin also traveled with one of his daughters on her church’s mission trip to the Ukraine where he helped provide medical care at a summer camp for children.

“Dr. Marlin” was also an involved member of the community. Concerned about the growing drug problem in the late 1960’s, he helped start Awareness House, primarily a drop-in center for troubled youth, now the Police Youth Bureau. Marlin developed a concern for people afflicted with alcoholism early in his medical practice, leading him to serve in a long-term advisory capacity to Heartveiw Foundation from its beginning in 1964.

In addition to Marlin’s many accomplishments, his children will remember him for providing the “fizz factor” to their childhood years – he loved to take them horseback riding, ice-skating, water-skiing, sailing, and to play almost any kind of game with them. His cabin on Blue Lake north of Bismarck remains a place of rest and recreation for his entire family. Marlin was also a great storyteller, and his children loved to hear his bedtime stories about the five “Flibberdoops” whose daily antics were eerily similar to their own!

The family wishes to thank the caregivers and staff of Touchmark, Hospice of the Red River Valley and Prudent Home Care for their loving care of Dr. Johnson during his final days.

In lieu of flowers, contributions may be made to Young Life, the Sanford Foundation or the Heartview Foundation.

To order memorial trees or send flowers to the family in memory of Dr. Marlin J.E. Johnson, please visit our flower store.