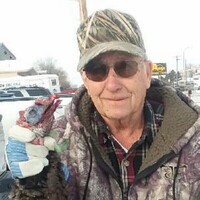 Burial will be held at the Fargo ND Veterans Cemetery at a later date.

Duane was born on November 29, 1936 in Fargo to Ralph and Eileen (Correll) Van Dame.

He was raised and educated in Fargo, ND graduating from Central High School in 1954. Following graduation, he enlisted in the Air National Guard and was honorably discharge in October 1964. He made a trip to the east coast on his BSA 650 motorcycle in early 1961. He still owns the motorcycle that took him on this adventure.

On November 24, 1961, he married Lucille Neset at Fosston, Minnesota. Originally, the two made their home in Fargo as Duane built their home from the ground up. They continued to reside there for 20 years before moving to Auduban, MN, for a short period of time then moved to Bismarck in 1984.

To say the least, Duane was a jack of all trades. He owned Duane’s Radio and TV, which he took a mail course to learn how to repair TV’s, etc. He was nothing short of a genius and whenever he didn’t know something, he took it upon himself to learn all he needed to know about his chosen project. With his urge to learn, he was a self-taught musician, playing the guitar, mouth organ and the accordion. With his knowledge in these instruments, he composed western style songs. He built meat processing equipment, including a special meat cutting saw. On top of his many talents, he belonged to the Bismarck Horse Club.  He shot archery and was a North Dakota State Champion in all divisions. Duane enjoyed hunting and fishing and even mounted his own deer head. Did we mention – he raised cattle, horses and chickens. On top of Duane and Lucille’s livestock, they also raised several Brittany dogs.

A move to Bismarck led to Duane building his third house from scratch, a house in which Lucille and Duane continued to reside in at the time of his passing.

To order memorial trees or send flowers to the family in memory of Duane Van Dame, please visit our flower store.