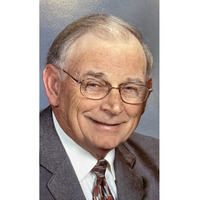 A livestream link for Dwight's service will be available here: https://youtu.be/jJa0bZxQ5PI

Dwight Norman Franklund, 86, Bismarck, passed away at the Missouri Slope Lutheran Care Center on Feb. 11, 2021. He was born in Baldwin on Sept. 12, 1934 to Arthur and Bertha Franklund of Baldwin. Dwight married Marlene Stolz, the love of his life, on Sept. 2, 1961 at Zion Lutheran Church, Bismarck.

Dwight's other passion was farming. He farmed with his father and brother for many years and eventually purchased the “old family farm” which became known as “Dwight’s Farm.”  Dwight continued to assist his father until Art’s retirement then, Dwight primarily raised cattle near Baldwin until “retiring” a few years ago. He and Marlene continued to work together repairing fence and other chores on the farm, after all a farmer never truly retires. In his last days, Dwight continued to share his love of farming with his family and friends.

As a young man Dwight enjoyed training his horses, singing, playing guitar and playing horseshoes with friends and family.

Dwight frequently joined his “Coffee Crew” at Kist Livestock and enjoyed their company and discussion. For many years he attended Capital Electric and Farmer's Union annual meetings. Every year, Dwight looked forward to the Vollmer bull auction and would enthusiastically report about the results.

To order memorial trees or send flowers to the family in memory of Dwight N. Franklund, please visit our flower store.