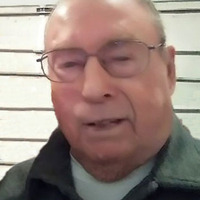 Funeral Services will be held at 11:30 a.m., Monday, August 2, 2021 at Parkway Funeral Services, 2330 Tyler Parkway, Bismarck. Burial will be at 1:00 p.m., Monday, at The North Dakota Veterans Cemetery, Mandan. Visitation one hour prior to service.

At the age of 18 Ray joined the Marines and served as a radio lineman in communications.

On April 12, 1961 he married the love of his life, Norma Strobel, at the American Lutheran Church. Over the next several years Ray worked in power line construction with Larsen’s Construction which required they travel around the country to different locations. They finally settled down in Canon City, Colorado, where they raised their three children: Michelle, Douglas and Wade. After many years they moved back to Bismarck where Ray worked for Monarch Products until he retired. In September of 2014 they moved to Fairview, Montana to live with their daughter Michelle.

Ray had a passion for creating things from scrap. His last large project was a tree house he built for his grandsons. If there was a need for something he figured out how to build it.

He was preceded in death by his parents, Theodore and Pearl Bird, his wife, Norma; brother, Dale Bird and sister, Alice Schaeffer and grandson Andrew Stitt.

To order memorial trees or send flowers to the family in memory of Earl Bird, please visit our flower store.