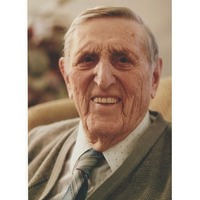 A service livestream will be available on the church’s YouTube channel, https://youtu.be/6bVDtxZDMEc

Services will be held at 1:00 pm, on January 5, at Our Savior’s Lutheran Church, 1615 N 18th Street, Bismarck. Visitation will be one hour prior to the service.

Edwin was born October 8, 1919 near Leith, ND to August and Anna (Keller) Johnson.  He attended school in Leith and graduated in 1937.  He married Marcia Kamrath on August 18, 1941 in Glendive, MT.  They farmed east of Leith.  He served on the township board and was a member of the rural fire district board of directors.  In 1978 they retired to Carson, ND. They moved to Bismarck in 1989. They enjoyed traveling and spending time with family and friends.  He collected pens and pencils from around the world and also had a collection of Avon bottles.  He was a member of Our Savior's Lutheran Church.  His wife preceded him in death on August 5, 2009.

He was proceeded in death by his wife, parents, sister June Swanston and daughter in –law Diana (Grandpre) Johnson.

To order memorial trees or send flowers to the family in memory of Edwin R. Johnson, please visit our flower store.