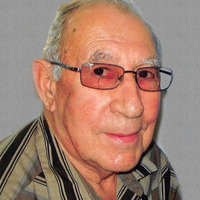 Visitation will be held from 5 to 7 p.m. Friday at Eastgate Funeral Service, 2302 E Divide Ave., Bismarck. A vigil service will be held at 7 p.m.

Edwin was born on September 16, 1935 to Michael and Emma (Hassa) McCarty at St. Alexius Hospital, Bismarck. He attended Bismarck High School and then served in the US Army from 1954-56.

He married Sherleen Bischke on October 6, 1962. Edwin was a lifetime resident of Burleigh County doing custom hay hauling for 20 years and farming/ranching until moving into Bismarck in 2004.

Edwin was a member of the Eagles, VFW, served on the Burleigh County FSA, Burleigh County Weed Board, Farmers Union, Naughton Township and school boards and the Capital Electric Advisory Board.

He enjoyed going to his grandchildren’s activities, playing cards and games with family, going on bus tours and to the casino and volunteering at the Burleigh County Senior Center.

He was preceded in death by his parents; sister and brother; a nephew; and two brothers-in-law.

A special thank you to Dr. Cameron Charchenko, MD, and his staff for their compassion and expertise. The team went above and beyond on Ed’s behalf and his family is forever grateful. The family would also like to thank CHI Health at Home employees Jasmine, Collette, Ashley and Dawn.

In lieu of flowers, memorials may be sent to the Dakota Zoo, Burleigh County Senior Center or CHI Health at Home.

To order memorial trees or send flowers to the family in memory of Edwin McCarty, please visit our flower store.