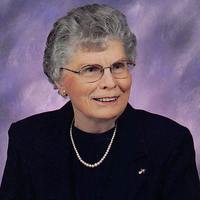 Due to COVID-19, a private family graveside service will be held.

Edythe was baptized in Nov. 1923 and confirmed in Sept. 1937 at Lutheran Church in Mooreton, N.D. She attended grade school in Mooreton, graduating from Wahpeton High School and ND State College of Science in Wahpeton.

After graduation, Edythe moved to Carson and worked for the Farmer’s Home Administration. She met her beloved husband, Eugene “Gene” DeLange in Carson. They were united in marriage on May 5, 1948 in Wahpeton. To this union they had one child, Jerry. They made their home in Carson until March 1955 when they moved to Fairview, Mont. In 1966, the family moved to Glendive, Mont., until they moved to Bismarck in 1988 to be closer to family. Her husband, Gene, passed away in April 1990. Edythe worked many years as a secretary, her last position at First National Bank in Glendive. Edythe had always been active in her church. She was a member of many churches, the last being United Church of Christ in Bismarck. She was active in Christian Women, teaching Sunday School and was an active member of Salem Circle. She belonged to Homemaker’s Club and was a member of Study Club in Bismarck.

Edythe was preceded in death by her parents; husband, Eugene; brother, Gordon and his wife, Jeanne Huss; brother-in-law, Clinton Likness; and many aunts, uncles and cousins.

The family wishes to express their deep appreciation for her excellent care while she lived at Edgewood in Mandan, CHI St. Alexius and most recently St. Gabriel’s Community and CHI St. Alexius Hospice. We are eternally grateful for the loving and caring way you took care of Edythe during this difficult time.

Family prefers in lieu of flowers, memorials be sent in Edythe’s name to Habitat for Humanity of Metro Denver at habitatmetrodenver.org/donate.

To order memorial trees or send flowers to the family in memory of Edythe DeLange, please visit our flower store.