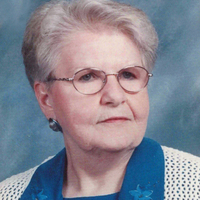 Funeral services will be held 11 a.m. Friday, March 5 at Good Shepherd Lutheran Church, 106 Osage Ave, Bismarck. Visitation will begin at 9 a.m. A service livestream will be available on the church's Facebook page: https://www.facebook.com/goodshepherdbismarck/. To keep all those who wish to honor Elaine’s memory safe, COVID-19 protocols of masking and distancing will be followed.

Burial will follow at 1 p.m. at the North Dakota Veterans Cemetery, Mandan.

On June 28, 1934, in her paternal grandparents’ home south of Willow City, Marvin and Laura (Kitzman) Ellis welcomed their seventh of eight children, Elaine, to the world.

Elaine was baptized and confirmed in the Missouri Synod. Some of her fondest childhood memories included berry-picking, family picnics along Willow Creek with the Kitzman family and babysitting her younger cousins. Though absent for an extended period of elementary school due to rheumatic fever, she graduated from Willow City school in 1953.

In 1955, Elaine went to visit her sister and brother-in-law in Ray, where they had opened a barber shop. It was there she met John Edward “Ed’ Tong, a WWII veteran, Teamster and father to Patricia, to whom she married on May 24, 1957. Together, they enjoyed fishing, bird-watching and raising their family of four daughters, Tammie, Beverly, Jacqueline and Lauralee.

During their time in Ray, Elaine was active in the Ray Jay Booster Club, Temple Homemakers, American Legion Auxiliary (she was proud of her 56-year membership), Thrivent and Ray Lutheran Church Women. She started selling Stanley Home Products in 1973 and was eventually known for gifting her children and grandchildren with various cleaning supplies and air fresheners (In fact, if you’re reading this and need products, please, please contact Tammie).

Elaine continued to make her home in Ray following Ed’s battle with Parkinson’s and his eventual passing on September 29, 1999 and two breast cancer fights of her own. In 2013, she joined Tammie and Jim when they moved to Bismarck. She lived independently until January 2020 before entering Missouri Slope Lutheran Care Center.

Macular degeneration took much of her vision, but her hearing was keen until the end, some of her final words instructing a nurse not to talk so loudly because she could still hear just fine! To the kind and generous staff who provided care and comfort during the challenges of a socially isolating pandemic and the final days of her life, we are truly grateful.

In lieu of flowers, donations can be made to Upper Missouri Ministries, the Ray WELCA, the Tioga American Legion Auxiliary and the Heaven’s Helpers Soup Café in Bismarck.

To order memorial trees or send flowers to the family in memory of Elaine Tong, please visit our flower store.