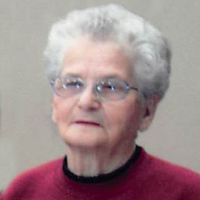 Elizabeth Weichel, 97, died Tuesday January 18, 2022, at CHI St. Alexius, Bismarck. Mass of Christian burial will be held 1 p.m. Saturday, Jan. 22 at Sts. Peter and Paul Catholic Church, Strasburg. A visitation will be held one hour prior at the church. A service livestream will be available on the funeral home website.

Burial will be held at Sts. Peter and Paul Catholic Cemetery, Strasburg.

Elizabeth was born on April 21, 1924, in Emmons County, the daughter of Joseph and Barbara (Schwab) Weichel. She grew up on the family farm and was raised and educated in the Emmons County schools.

Elizabeth moved to Bismarck in 1962 and worked in various roles. In 1971, Elizabeth began working for The Baptist Home in the Housekeeping Department where she remained until she retired in 1988.

Elizabeth was strong in her Catholic faith and attended Mass and prayed the Rosary daily. She was a long-time member of Saints Peter and Paul Catholic Church in Strasburg. Elizabeth enjoyed gardening, canning, sewing, and spending time outdoors. She also had a talent for all things mechanical. Elizabeth cherished her siblings and their families and was a beloved aunt to all.

To order memorial trees or send flowers to the family in memory of Elizabeth Weichel, please visit our flower store.