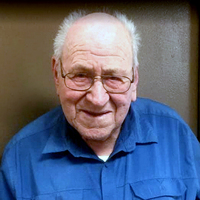 Elmer was born on April 23, 1927, one of twelve children of Jacob and Lydia (Siewert) Kirsch, on a farmstead north of Burt, N.D. in Hettinger County. He attended rural school in a one-room schoolhouse. Elmer served in the Army from 1945 to 1947.

On March 20, 1949 Elmer married Agnes Zimmerle and together had three children, who they raised on a farm near Mott.

In 1991, he retired from farming and he and Agnes started wintering in Arizona, where they were active volunteers in national, as well as state and county parks. They also volunteered in N.D. parks during the summer months.  In 1998, they bought a house in Pima, Ariz..  Agnes passed away in March of 2010 and Elmer moved to Bismarck.

Elmer and Agnes were charter members of the Mott Evangelical Free Church. They were active in many church activities in Mott.

A family service will be held later in the year.

To order memorial trees or send flowers to the family in memory of Elmer Kirsch, please visit our flower store.