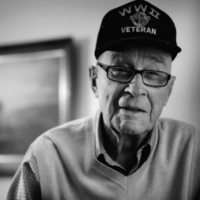 Emmett was born on November 9, 1924, in Crookston, Minnesota. His family moved to Bismarck when he was four years old. Small town Bismarck during the depression was made interesting for him with Sunday drives to the airport to watch military planes land and take off or watching Satchel Paige play with the town’s integrated minor league baseball team. As a young child, Emmett and his friends (one of who was the nephew of Louis L’ Amour) would explore the banks of the Missouri River from early morning until dinner time. Growing up along the Missouri River was an experience for Emmett and his friends where they fished, camped, smoked pussy willows, and watched the ice breakup in spring and the lowlands south of the railroad tracks flood. In the fourth grade, Emmett began playing the ukulele – a hobby he continued on into his 90’s.  He and his sister, Erin, also enjoyed many summers in Wetmore, Kansas, where his maternal grandparents had a farm.

Emmett’s father, Peter Joseph Schmitz, was commander of the Veterans of Foreign Wars in 1944, an auctioneer, and a farm and land manager. Peter Schmitz joined the Burleigh County Sheriff’s Department in 1939 and was appointed acting Sheriff in 1950. Peter won two elections for Sheriff, a position he would hold until he died from injuries incurred in the line of duty on January 11, 1955. Emmett’s mother was Grace Wilson Schmitz. Grace was a homemaker and a member of the Daughters’ of the American Revolution. She died in 1963.

Emmett received his draft notice in the fall of 1942 and along with his classmates received deferments until graduating from Bismarck High School in the spring of 1943. Emmett served in the Army from 1943 until 1946, starting in Hilo, Hawaii, Fort Ruger on Oahu, Hawaii, and then participated in the liberation of Guam. Eighteen months later, he returned to the United States on the aircraft carrier Bunker Hill. He was honorably discharged at Fort Lewis in January of 1946.

Emmett continued his education at Bismarck Junior College and also served in an ordnance company of the North Dakota National Guard. In 1951, he earned a Bachelor of Science degree in Petroleum Geology from Texas Technological College, now University. He continued his education at the University of North Dakota where he earned a Master of Science in Geology, June of 1955.

Emmett’s working career took him to Casper, Wyoming, Rock Springs, Wyo., Denver, Colorado, and Calgary and Edmonton, Alberta, Canada. Emmett retired from the oil industry in 1986, in Denver, Colo. Tired of retirement, Emmett accepted a year-to-year contract with the Environmental Protection Agency, expecting to work there only a couple of years; he would not retire from the EPA until January 2016, at age 91.

Emmett had a stroke a few days before his passing, which began his final journey. His ashes will be interred at the North Dakota Veterans Cemetery, Mandan. A memorial service will be held 10 a.m. Monday, Sept. 20 at Eastgate Funeral Service, 2302 E Divide Ave., Bismarck. His life’s journeys began in his beloved home state and will always remain.

To order memorial trees or send flowers to the family in memory of Emmett Schmitz, please visit our flower store.