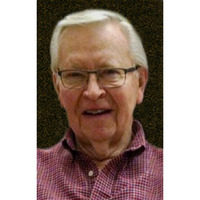 Services will be held on Wednesday, January 12, 2022, 11:00 am at Zion Lutheran Church, 413 E Ave D, Bismarck, ND. Services will be live streamed on the church website https://www.youtube.com/c/ZionLutheranChurchBismarckNorthDakota.  Visitation will be on Tuesday from 5-7:00 pm, with a prayer service starting at 7:00 at Parkway Funeral Service, 2330 Tyler Parkway, Bismarck. Burial will take place at Sunset Memorial Gardens.

Erwin was born on January 31, 1935, in Streeter, ND to Adam and Christina (Kirschenmann) Graf.  He was raised in the Streeter area and in 1957 was drafted to serve in the United States Army, spending time in Germany before being honorably discharged in 1959.  He returned to Streeter where he worked as a farm hand for a short time before moving to Bismarck to work for Skaar Engineering for five years.  In 1961, on a blind date, he met the love of his life, Adrene Hintz.  After a short courtship, the couple was married on December 10, 1961, in Hannover, ND. Soon they grew their family, welcoming their son, Steve and a short time later daughter, Debra.

They moved to Fargo, where Erwin attended the Moler Barber College, returning to Bismarck in 1966, where he started his life-long profession as a barber. He worked for a few different barbers and eventually landed at The Northbrook Barber Shop, where he became a partner with Dennis Schiele, providing outstanding service for over 50 years.  Erwin retired around 2014.

He was a member of Zion Lutheran Church, where he ushered for many years and also sang in the choir. He enjoyed fishing, and usually caught the most fish.  He also liked to hunt pheasants and deer. He and Adrene did some traveling, including a few trips to Branson, Medora, Streeter, Hannover and anywhere there were people to visit. Erwin played the accordion for many years and loved watching the Polka Spotlight every day. He was a member of the Barbers Association, the Veterans of Foreign Wars and the Bismarck Eagles Club.  He also liked to bowl and ride his motorcycle, often giving Adrene rides.

To order memorial trees or send flowers to the family in memory of Erwin Graf, please visit our flower store.