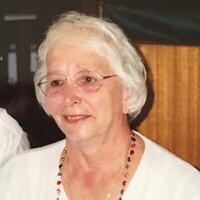 Esther Verna Eckman was born the daughter of Jacob and Christine (Diegel) Eckman May 1, 1934, in Burnstad. She attended country school and helped her mother and father care for their home and farm.  In her early life, she was an active member of 4-H where she pursued embroidery and other artistic passions. Her mother noted that she completely took over the family sewing, gardening and canning. She also kept the family farm records and had livestock projects with her brother, Albert.

Esther already knew Richard and after a dance one evening, she accepted a ride home and they have been together ever since. They were married in Burnstad on April 5, 1959.  During the first five years of their marriage, Richard worked construction and they lived in several places across North and South Dakota.  Esther and Richard both wanted to settle down and farm, so when they had the opportunity to purchase land near Wishek, they became farmers and ranchers.  Starting from scratch, they worked from sun up until sun down. Esther was just as much a part of the farming and ranching operation as was Richard. They built a life they loved, became active members in the community and welcomed their daughter, Cindy.

While Esther enjoyed working on the farm, she also enjoyed playing pinochle, square dancing and visiting with family and friends. She was an active member of the United Church of Christ and supported the food pantry and community events including the Buffalo Supper in Wishek. In 2013 Esther and Richard  moved to Bismarck, where they became members of the United Church of Christ.

Esther loved to travel when they could get away from the farm and managed to see much of the country from coast to coast and border to border. In later years Esther and Richard traveled overseas to Nepal, China and Armenia to visit their daughter, grandson and son-in-law who worked for the Peace Corps.

She was preceded in death by her parents, Jacob and Christine Eckman; brother and sister-in-law, Albert and Janice Eckman; and siblings, Lillian and Marvin.

Services will be held at a later date. Burial will take place at the North Dakota Veterans Cemetery, Mandan.

To order memorial trees or send flowers to the family in memory of Esther Lang, please visit our flower store.