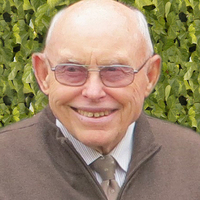 Visitation will be held from 5 to 8 p.m. Thursday at Parkway Funeral Service, Bismarck.

He was educated in Bismarck and graduated from Bismarck High School in 1949. He worked for a short time at Vantines Paint and Glass in Bismarck before attending masonry training for eight weeks in Minot. He began work as a brick mason on his 21st birthday and continued the trade full-time until his retirement at age 64.

On February 13, 1954, he married Margaret “Peggy” Houkom in Fargo and they made their home in Bismarck. To this union, five children were born.

In 1967 they moved to a farm northeast of Bismarck where they raised their family. He enjoyed raising cattle and sheep and planting trees on the farm. In 1995 he retired from the masonry trade and continued living on the farm until 2003 when Gene and Peggy moved to Bismarck.

He made a vow to serve God at age 11 and stayed true to that vow all his life. He enjoyed fellowship with others in the faith.

Gene and Peggy enjoyed spending time with family, whether camping and fishing or at their home.

He was preceded in death by his wife of 65 years, Peggy; his parents; two brothers, Vernon and Myron; and one sister, Joanne Capps.

To order memorial trees or send flowers to the family in memory of Eugene Haakenson, please visit our flower store.