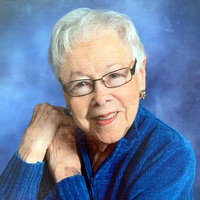 Eunice was born on October 16, 1931 in Providence, Rhode Island, to Theodore and Marjorie (Hunt) Shapleigh. She graduated from the Day School in New Haven, Connecticut, in 1949 and Hollins University in Roanoke, Virginia, in 1953.

From 1953 to 1957 she was employed by G. Fox and Co. in Hartford, CT, and the Associated Merchandising Corporation in New York City. She was married to Edgar “Pete” Brinckerhoff in 1957. They lived in Florida, Indiana, New York and Connecticut before moving to Bismarck in 1968 with their four children.

After arriving in Bismarck, she worked for the Bismarck United Church of Christ in various capacities, including working for the Commission for Educational Ministries - a joint project of the UCC and Presbyterian Churches in the early 1980s. In 1983 she began working for the wider ecumenical community and served as Coordinator/Office Manager of the North Dakota Conference of Churches until she retired in 1999.  After retirement, she wrote brief histories of the Northern Plains Conference, UCC, and the Current Events Club.

She was a member of the United Church of Christ, the Current Events Club and the Descendants of the Mayflower Society.

She spent the last four years enjoying her life in her “Ivory Tower” as she fondly called her home at St. Benedictine Community where she was known for her caring, kind and independent spirit.

She was preceded in death by her husband, Edgar (Pete) and son-in-law, Daniel Harris.

Please remember Eunice with an act of kindness or help to someone in need.

To order memorial trees or send flowers to the family in memory of Eunice Brinckerhoff, please visit our flower store.