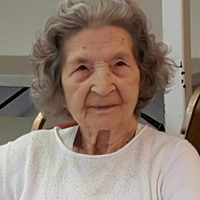 She was raised and educated in Braddock.  Evelyn graduated in 1934 from St Mary’s High School in Bismarck and received a Secretarial Certificate from Capitol Commercial College as well as a Bachelor of Arts degree from George Washington University, Washington, D.C.

Evelyn worked in Civil Service in Washington, D.C.  She later moved to Bismarck in 1995 and resided at Marillac Manor, Edgewood Vista and later St. Vincent’s.  Evelyn was a member of St. Mary’s Catholic Church.

To order memorial trees or send flowers to the family in memory of Evelyn Regina Schlosser, please visit our flower store.