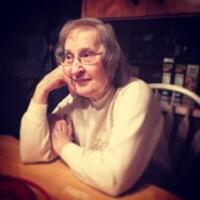 Burial will be held at Holy Cross Cemetery, Steele.

Florence was born July 27, 1934 on the family farm four miles north of Napoleon to Cletus Regner Sr. and Magdalene (Rohrich) Regner. Florence was the oldest of eight children.

Her family moved to a farm three miles north of Steele when she finished the third grade. After graduation from Steele High School, Florence moved to Atlantic, Iowa, where she worked at Woolworth’s selling candy and then worked as a telephone operator. She moved back to the family farm by Steele two years later to help her dad care for her siblings and the farm after her mother’s sudden death.

Florence met Jorgen “John” Nielsen when he was installing telephone lines in the Steele area. They wed on April 28, 1958 in Paonia, Colorado. Florence and John lived in several states, moving as John’s job took them many places. They settled in Bismarck in 1967. John passed away on Sept. 3, 2001.

Florence devoted her life to being a wife and mother. She enjoyed taking time to sit and play games with us kids as we grew up.

Her favorite things to do after raising her children were reading, playing games with and spending time with her grandchildren. She animatedly read book after book to them as they sat on her lap. Florence liked doing crossword puzzle books, fixing puzzles, reading, playing cards, games and watching game shows – especially Jeopardy.

Florence enjoyed travelling and taking trips to visit relatives in Denmark, Scotland, Arizona and Alaska. In Alaska, she and her brother, Leo, shot a bear that had broken into their food cache!

Florence is survived by one son and his wife, Kevin and Marne Nielsen, Granville, and their children, Christopher, Jesse, Ricky Jay, Rae-Mae and Kiara; one daughter and her husband, Michelle and Craig Bohlander, Sterling, their children, Kaitlin and Chase; two step-grandchildren, Brandon and Leesa; and four great-grandchildren.

To order memorial trees or send flowers to the family in memory of Florence Nielsen, please visit our flower store.