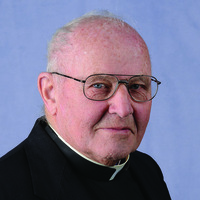 A service livestream will be available at the following link: https://venue.streamspot.com/event/MzEzODM3Mg

Father Charles “Charlie” Albinus Heidt, 90, Bismarck, passed away on March 30, 2022, at the Baptist Home in Bismarck.  Mass of Christian burial will be held 10:30 a.m. Monday, April 4 at the Pro-Cathedral of St. Mary, Bismarck, with the Most Reverend David D. Kagan, Bishop of Bismarck, officiating.  The priests of the Diocese of Bismarck will concelebrate.  Burial will follow at St. Mary’s Cemetery, Bismarck.  Visitation will be held from 3 to 5 p.m. Sunday Parkway Funeral Service, Bismarck, with a vigil prayer service at 5 p.m. Visitation will also be held one hour prior to Mass.

Father Charlie was born on January 16, 1932, rural DeSart (Kennedy Township), North Dakota, to Albinus and Eugenia (Greff) Heidt.  He was raised on a farm south of New England where he attended country school through 8th grade.  He graduated from St. Mary’s High School, New England.  Father Charlie furthered his education by attending Crosier Seminary, Onamia, MN, where he studied for three years followed by two years at Immaculate Heart of Mary, Winona, MN.  He then entered St. Thomas Seminary, Denver, CO, where he received his Masters of Divinity and was ordained by Bishop Hilary B. Hacker, Bishop of Bismarck, on May 30, 1959, at St. Mary’s Church in New England, ND.

He served as Pastor at the Churches of Immaculate Conception, Max, Holy Spirit, Butte and Holy Cross, Douglas, until being named chaplain and director of religious life and religious education at Bishop Ryan High School, Minot, for one year.   His next assignment was Pastor of Our Lady of Grace, Minot, where he served until 1987.  He took a temporary assignment for two months as Associate Pastor at St. Martin, Center, and St. Edwin, Washburn.  Father Charlie attended Jesuit School of Theology at Berkeley for the Institute in Spirituality and Workshop for a one-year program.  Upon his return, he was appointed Pastor of the Church of St. Mary, Bismarck, serving there until his retirement on July 1, 2003.  In his retirement, Father Charlie continued to substitute in parishes throughout the diocese.  He received the Native American name Ma-ishu Xubash Sacred Eagle by the late Gail Baker, Sr.  Father Charlie was widely known for proclaiming the Gospel by memory.

He was preceded in death by his parents, Albinus and Eugenia; brothers, Adam, John, Cyriak, Kasper, Philip, Frank, Edward, and Richard Heidt; and sister, Leontine Gabel.

In lieu of flowers, memorials may be sent to Father Charlie’s favorite organizations: School Sisters of Notre Dame, St. Joseph’s Indian School, or the Catholic Medical Mission Board.

To order memorial trees or send flowers to the family in memory of Fr. Charlie Heidt, please visit our flower store.