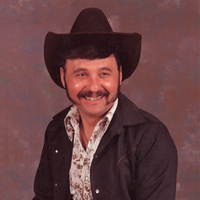 Garold, known as Blackie, was born with his twin brother, Gary, on May 14, 1944, to John and Lydia Weisenburger. He was raised on the family farm in Tuttle and attended Tuttle school until joining the U.S. Army in 1962 with his twin brother. After his honorable discharge in 1964, he worked for lntermountain Lumber Company for a few years until his employment with Rosco Steele in Missoula, Montana, for 15 years.

He taught himself to play drums which gave him the opportunity to earn extra income by playing in bands and clubs all over Missoula. He married Debby Milbrandt and together they had one son, Cory. When their relationship ended, he returned to North Dakota to be closer to his son. He worked with his brother in construction for a few years. He then moved to Underwood in 1979. There he managed the VFW Bar for a year and also managed apartments for several years.

Garold played drums for the Fuller and Wild Fire bands until 1986 when he suffered a severe back injury from crashing an ultralight aircraft that had a dysfunction in the sky. That crash caused a broken back which led to many back surgeries forcing him to go on disability. He could no longer play drums.

In 2004, his brother Gary retired and moved in with him in Underwood. He loved fishing and camping with his twin and was always happy to share his catch with family and friends.

To order memorial trees or send flowers to the family in memory of Garold Weisenburger, please visit our flower store.