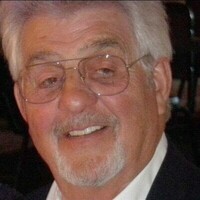 Gary was born March 3, 1935, in Bismarck, ND, the son of Mary Nicola Anderson and Irwin Anderson.  He grew up in Bismarck and graduated from BHS. Gary continued his education and graduated from the University of North Dakota. He was a member of the Sigma Chi fraternity.  He married Marcia Rohde on August 24, 1956.  After graduation from UND they moved back to Bismarck. Later, they returned to Grand Forks where Gary started working in the Rohde family business, Congress Inc.  They spent 10 years in Grand Forks expanding the business and their family.  In 1968 they purchased Buck Distributing and opened the Bismarck operation of Congress Inc. Gary ran the western part of the state and was president of the company. He was an active board member of WSWA, the trade association of the wine and spirits industry. He made many good friends in the business. He and Marcia developed Front Street Station in Bismarck.  The Front Street property consisted of 5 buildings built in 1911. Gary and Marcia were proud to be a part of restoring a treasured landmark.

Gary had a lifelong love of travel. He traveled extensively to wineries in Europe, the U.S., South America, and Australia.  Gary continued to travel after retiring. He explored the top of the world, the bottom of the world and everywhere in between.

Gary was also very proud of his Lebanese heritage. He passed on his love of cooking the traditional foods to his children and grandchildren. He served as the president of the Attiyeh Society the year they held the convention in Bismarck and cousins came  from all over the country to celebrate.

Gary was also an avid hunter and fisherman. He enjoyed many hunting and fishing trips with his brother Mickey Anderson and his lifelong friend Chuck Eastgate, and a group of many other hunting and fishing buddies. This included the fishing club in Cambria, CA.

In the late 1990’s Gary and Marcia retired and began spending more time at their home in Cambria, CA.  He loved the picturesque views and the calming rhythm of the ocean.  Marcia passed away May 30, 2008, 14 years to the day before Gary’s passing.

Gary continued to travel and enjoy the good things in life with his special lady friend Liz Lucas. She was a good companion and a great comfort to him.

Gary was preceded in death by his wife, Marcia; son, Geoffrey; parents, Irwin and Mary Anderson; sister, Mona Barfield; and his brothers, Mickey and Sammy Anderson.

In lieu of flowers please consider a donation to your local Hospice.

To order memorial trees or send flowers to the family in memory of Gary Anderson, please visit our flower store.