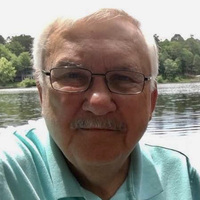 Gary Kalanek passed away Aug. 31, 2021, at the age of 77. He wanted everyone to know that he didn’t fight a courageous battle against colon cancer; he whined and complained the whole time he was receiving treatment, but it gave him more time to enjoy being with his family, friends, and dog.

Born in Dickinson, he graduated from Dickinson High School and spent the next couple years travelling the west coast and briefly living in Kalispell, Montana. Gary worked construction for many years building roads and airports around the state and taught in the heavy equipment operator’s program at Dickinson State University. Gary’s love of woodworking and restoring antiques led to opening the Heirloom Wood Shoppe and dragging the family around to flea markets and auction sales to the point where the kids would try to distract him from signs along the side of the road when travelling. Later he worked for KLJ in Dickinson and Bismarck until he and Dave Hoerner partnered to develop retirement housing. When he retired, he called himself a househusband and spent time on his hobbies.

Gary’s beloved Miami Dolphins let him down more times than not, but he never gave up hope they would win another Super Bowl. He collected knives, golfed poorly, was an avid reader, loved watching Jeopardy! and was a skilled woodworker. If he found a useful tool, he typically bought two and gifted one to his son Bill or his friend Dave. He loved classic cars and often spoke fondly of special ordering a ‘64 GTO and driving it around Dickinson.

Jovial. Funny. Witty. Just a few words to describe Gary’s personality. He was always on a quest for the next joke he could tell and couldn’t wait to tell it to the guys at coffee. He teased his sister, Daphne Hibl, friends, and family and once said, “I wouldn’t tease you if I didn’t like you,” so if he ever teased you know that it was his form of affection.

Gary and Connie (Black) were married for 51 years, shared many ups and downs, but never went to bed at night without saying, “Good night. I love you,” even when they were mad at each other. They had three children: Jennifer (Todd) Lefor, Bill (Karla) Kalanek, and Jocelyne (Alex) Teeter, and Gary loved being ‘Grandpa’ and ‘Papa’ to his six grandchildren: Sarah, Ava, Joshua, Peyton, Calista, and Isaac. He loved their hugs, even when Joshua and Isaac came at him at 30 mph!

Gary believed in the Big Guy but didn’t like organized religion so the family will hold a celebration of his life from 11:30 a.m. to 1:30 p.m. Sunday, September 26 at the Sertoma Community Center, Bismarck. There will be a short memorial program followed by lunch. The family will share stories of Gary’s life and encourage anyone that wants to share a story or a joke to do so.

In lieu of flowers, the family requests that donations be made to St. Jude Children’s Research Hospital or Central Dakota Humane Society.

To order memorial trees or send flowers to the family in memory of Gary Kalanek, please visit our flower store.