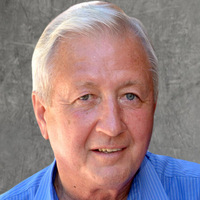 Gary L. Puppe, 78, Bismarck, died on April 25, 2021 due to complications associated with COVID-19. Graveside services will be held 2 p.m., Friday, April 30, at the North Dakota Veteran Cemetery, Mandan. Masks are required. There is guest limit of 60 in the cemetery chapel.

Gary was born July 21, 1942 to Leo and Ella (Heuchert) Puppe and was raised on the family farm at Hensel. He attended country school, received his eighth grade diploma from Hensel Public School, his high school diploma from Walsh County Agricultural School at Park River in 1960 and, in 1964, a bachelor’s degree with a major in agriculture education from NDSU where he was a member of Alpha Gramma Rho fraternity and Blue Key. After graduation, Gary was commissioned as a Second Lieutenant in the U.S. Army and served in Korea. While stationed there, he achieved the Black Belt Degree in Judo.

Following his military service, Gary was an Assistant County Agent at Wahpeton (Richland County) and later was an Agricultural Loan Officer at First National Bank in Wahpeton. Gary relocated to Bismarck where he was the Executive Secretary for the North Dakota Soil Conservation Committee and, in 1987, appointed Executive Vice President of the ND Association of Soil Conservation Districts/Lincoln-Oakes Nurseries at Bismarck and Oakes. He worked there until his retirement in 2006.

Gary was an active and devoted member of Rotary International, American Legion, AmVets, and 40 & 8 Society (referring to a French boxcar’s capacity for either 40 soldiers or 8 horses during World War I). He was an American Red Cross volunteer in New York City after 9/11/2001 and attended Zion Lutheran Church in Bismarck. Gary loved to cook. For many years, he rotated as a hosting chef every week for the evening supper club at his residence, Plaza Tower Condominiums and also shared his culinary skills with his co-workers at the Nursery. Throughout his adult life, he was up at 5:30 a.m. to exercise outdoors irrespective of the weather. He enjoyed walking through the parks in Bismarck and could often be found there reading/researching his passion for cooking.

Gary was preceded in death by his parents; brother and sister, Janice and Duane (twins); and nephew Wade.

To order memorial trees or send flowers to the family in memory of Gary Leo Puppe, please visit our flower store.