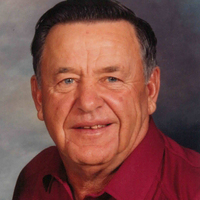 Visitation will be held from 6 to 7 p.m. Thursday at Parkway Funeral Service, Bismarck. A prayer service will begin at 7 p.m. Visitation will continue an hour-prior to the memorial service at the funeral home.

Burial will be held 12 p.m. at the North Dakota Veterans Cemetery, Mandan.

He was born in Steele, ND, the son of George Sr. and Celia (Makedonsky) Kalainov on February 14, 1932. He attended Allen Township rural school for eight years and graduated from Steele High School in 1949.

After graduation, George farmed with his father and brother Nick north of Steele before being inducted into the Military July 28, 1954.  He proudly served his country in the Army after the Korean War. While stationed in Korea, he served as a helicopter mechanic in the Helicopter Maintenance Division where he earned the title of Helicopter Crew Chief.  He was honorably discharged April 30, 1956 and returned to the family farm. It was during this time that he met the love of his life, Evelyn Kemmet of Dawson. George and Evelyn were married April 1, 1959. Together, they established their own farm where they operated a cattle and grain farm. He and his brother, Nick raised registered Polled Hereford cattle and showed them at the Denver Stock Show in Colorado. They also held annual bull production sales, selling as many as 70 registered Polled Hereford bulls, where each bull was halter broke and led into the sales ring.

George loved flying, and in the late 60’s he obtained his private pilot’s license.  He enjoyed flying for pleasure, looking at cattle and crops from the air, giving his girls a ride or making a parts run to Bismarck, Jamestown or where ever he needed to go.

In 2004, George and Evelyn retired from farming and bought a new home east of Bismarck. He spent many hours in his new shop with his newfound hobbies of restoring antique tractors and working on his many lawn tractors. He loved spending time with his children, grandchildren, and great-grandchildren, as well as playing pinochle with family, friends, or neighbors.

In August of 2018, George and Evelyn moved into Prairie Pointe Assisted Living Center, where he resided until moving into the Baptist Health Care Center.

He will be greatly missed by his three daughters and sons-in-law, Shelly and Doug Buehler, Jodi and Donnie Biegler, and Jamie and Ron Bernhardt; his grandchildren: Jameson Buehler and Fiancée, Erin Porter and their son, Levon; Melissa and Aaron Rohrich and their children, Madelyn, Brody, Peyton, Paige and Brynn; Amber and Rick Rohrich and their children, Kaden, Kylee and Kolden; Amanda and Ben Oster and their daughter, Evelyn; Dylan Bernhardt and his special friend, Anh Nguyen; Jasmine and Nic Pelletier; his brothers-in-law and sisters-in-law, Willard and Joann Kemmet, Gary and Lynn Kemmet, Debbie and Dick Sperle, and Jackie and Ken Borchers.

He will be welcomed into Heaven by his parents, his wife of 60 years, Evelyn, sister and brother-in-law, Doris and John Heffelfinger, two brothers and sisters-in-law, Nick and Coletta (Regner) Kalainov; Sam and Delores “Lori” (Holm) Kalainov, two nephews, Ron Kalainov and Tom Heffelfinger, as well as many friends who have gone before him.

The family would like to express their heartfelt gratitude and thanks to the staff at the Prairie Pointe Assisted Living Center and the Baptist Health Care Center for not only their awesome kindness and care over the past few years, but also for the friendships he developed with them.

Memorials may be directed towards the North Dakota Veterans Cemetery Foundation.

To order memorial trees or send flowers to the family in memory of George Kalainov, please visit our flower store.