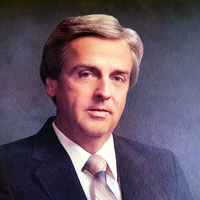 Dr. Monzingo was born in Dubberly, LA, on February 10, 1936. He attended public schools in Webster Parish, graduated from the Louisiana State University in Baton Rouge, LA, and subsequently graduated from the Louisiana State University School of Medicine in New Orleans, LA.  He then completed a medical internship at Fitzsimons Army Medical Center in Denver, CO, and a residency in Radiology at Letterman Army Hospital at the Presidio in San Francisco, CA. Following his medical training, Dr. Monzingo served as an Army medical officer, achieving the rank of Captain prior to his military retirement.

Dr. Monzingo’s military service career included two tours of service in a combat surgical hospital near Saigon in the Vietnam War. He served his country with honor and valor and was awarded the distinguished Bronze Star Medal for heroic achievement during the Tet Offensive in 1968.  When his surgical hospital was severed from supply routes during the Tet Offensive, Dr. Monzingo bravely volunteered for the mission of driving an armored truck through enemy lines, and he successfully obtained medication and crucial supplies for patients and the hospital.

Following his military career, he moved to Brewton, Alabama and enjoyed a distinguished medical career in private practice for over 30 years at D.W. McMillan Memorial Hospital.   In addition to general Radiology, Dr. Monzingo also obtained board certification and practiced in the medical specialties of Radiation Oncology, Nuclear Medicine, and Mammography.  He was also a member of the First United Methodist Church of Brewton and the Country Club of Brewton.

After his professional retirement in Alabama, Dr. Monzingo enjoyed a second Radiological career, from 1999 - 2011, as a practicing specialist at Mid-Dakota Clinic in Bismarck, ND.

Dr. Monzingo was preceded in death by his wife of over 30 years, Sally Owens Monzingo, his parents, Luther and Myrtle Vice Monzingo, and his brother, MacLuther “Mac” Monzingo, a lifelong resident of Shreveport, LA.

He is survived by his devoted wife of over 25 years, Joy Lynne Reeves Monzingo.  He is also survived by his daughter, Alice Monzingo Nolen (Richard), Atlanta, GA, and grandchildren Richard Nolen, Jr. and Elizabeth Nolen.

Dr. Monzingo loved his faith; he loved his family; he loved his life; and he loved his country.  He was devoted to the practice of medicine and to helping others, serving as a true embodiment of the principles of the Hippocratic Oath.  He was known to his patients, medical colleagues, and staff as humble, kind, soft spoken, and compassionate.  He was an avid traveler, loved sports cars, his LSU Tigers football team, and was a longtime supporter of the Tiger Athletic Foundation. He treated everyone he knew or met with dignity, respect, and genuine kindness.

The family is planning a memorial service, which will be scheduled at a later date.

The family would also respectfully ask that, in lieu of flowers, memorials in his name be made to:

To order memorial trees or send flowers to the family in memory of George Franklin Monzingo M.D., please visit our flower store.