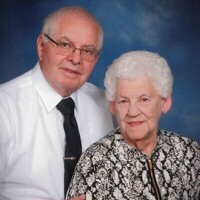 Gerald and Eileen (Boechler) Schatz, married for 63 years, passed away within hours of each other on Sunday, December 6, 2020 at St. Alexius Hospital, Bismarck.

Mass of Christian burial will be on Friday, December 11, 2020 at 10:00 am at Church of Corpus Christi, 1919 N. 2nd St., Bismarck. The funeral will be live streamed on the Corpus Christi Facebook page: https://www.facebook.com/CorpusBismarck/. Visitation will be on Thursday, from 5:00-7:00 pm at Parkway Funeral Service, 2330 Tyler Parkway, Bismarck.  There will be a private family vigil prayer service at 7:00, that will be live streamed for everyone to join on the funeral home website.  Burial will take place at St. Mary’s Cemetery, Bismarck.

Gerald, age 86, was born on August 28, 1934 on the family farm near Balfour, ND, the son of Adam and Agnes (Leier) Schatz.  He was the 2nd youngest of 11 children. He attended a country school in that area and then dedicated himself to helping on the family dairy and grain farm, eventually taking it fully over.

Eileen, age 81, was born on May 23, 1939 on the family farm near Karlsruhe, ND, the daughter of John and Juliana (Merck) Boechler. She was the 3rd youngest of 14 children.  She was raised and educated in Karlsruhe, graduating from Karlsruhe High School.

Gerald and Eileen met at a dance and after a short courtship, were married on October 21, 1957 at Sts. Peter and Paul Catholic Church in Karlsruhe.  To this union were born four boys, Blaine, Warren, Nathan and Patrick. They made their home on the farm near Balfour until the mid-1980’s when they moved to Karlsruhe and both Gerald and Eileen worked at the school as custodians.  They later moved to Velva, where they also worked together at the school, both retiring in the spring of 2010, although, they called on Gerald many times after retirement to come and help, which he did. In 2011, they made the move to Bismarck, where they fully retired.

Strong faith was what built their life together.  Gerald could be found every day praying the rosary and Eileen prayed for family and friends, even writing out some prayers she left for her family to find. They were both active in the Catholic Churches they belonged to throughout the years. Gerald was a lifetime member of the Knights of Columbus and Eileen was a member of the Christian Mothers.

In 63 years of marriage, you rarely saw one without the other.  They enjoyed going on day trips, whether it was to explore a small town in North Dakota that they had never been to, a quick trip to the casino or just out for a drive. Just say the word auction and they were there! Grandma was known for her chocolate chip cookies, among other delicious goodies she baked and the noodles she made. She also loved her flowers and loved watching Grandpa take care of them for her.  Gerald had a work ethic like no other-something he instilled in his boys throughout the years.  He enjoyed doing word searches and making wine, which he shared with everyone.  A game of cards was seldom passed on and especially when they lived in Velva, they spent many days playing cards at the Velva Senior Center.

Memorials are preferred to the Corpus Christi Food Pantry or the donor’s choice.

To share memories of Gerald and Eileen, sign the online guestbook and for more information on live streaming, visit www.parkwayfuneral.com

To order memorial trees or send flowers to the family in memory of Gerald and Eileen Schatz, please visit our flower store.