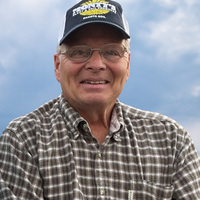 Jerry was born December 6, 1953 to Delores and Frank Schaff. He attended Flasher School where he graduated in 1971. He married Brenda Braun on February 1, 1975, and the two resided at the family farm until the time of his death. On his birthday in 2017, he decided to quit milking after many years of dedication to the stinky barn smell; he didn’t miss it one bit.

Jerry was a strong farmer/rancher and a very special husband, dad, grandfather, son, brother and uncle. He especially had a special bond with his grandkids. He had patience and a gentle hand with each and every one of them and adored them in their own way. Many hours were spent feeding the cows with grandkids riding along. He had seen many sunrises and sunsets through the front window of the tractor, swather and combine. He drove the rolling hills on a 4-wheeler checking cows. That’s truly where his heart always was. He kept his radio tuned to AM 550; sometimes shockingly loud to the next person that started the tractor. Jerry had a gentle hand and a big heart for everyone he knew or met through his journey in life.

Jerry was preceded in death by his father, Frank Schaff; stepfather, Clarence Morris; brother, Ted Schaff; father and mother-in-law, Joseph and Clara Braun and one grandson, Caleb Schaff who is riding with grandpa in the tractor through greener fields in Heaven.

To order memorial trees or send flowers to the family in memory of Gerald "Jerry" Schaff, please visit our flower store.