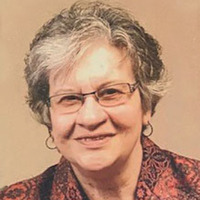 Visitation will be held from 5 to 7 p.m. Thursday at Eastgate Funeral Service, 2302 E Divide Ave, Bismarck. A rosary/vigil service will begin at 7 p.m.

Gloria was born to John and Magdalen Fleck on July 4, 1950, in Bismarck.  Gloria, the second oldest of five siblings, graduated from Flasher High School in 1968 and then moved to Bismarck where she soon met the love of her life, Edwin Landeis.  The two were united in marriage on September 2, 1972. Ed and Gloria always enjoyed each other’s company, whether dancing, going for a drive, or visiting family and friends. Ed says she was the best wife anyone could wish for.  In their nearly 50 years of marriage, they were blessed with two sons, Jason and Sheldon, Gloria’s pride and joy. She always said the best job she ever had was raising her two boys.  Together with Ed, Gloria taught her sons the value of hard work, enjoying country life, and even better – how to cook.  Gloria was always preparing a meal, sharing her recipes, and selflessly giving to others.

From her sons, Gloria gained two daughters.  Jason married Kim (Boehm) in 1995, and Sheldon married Karri (Colby) in 2000.  She loved Kim and Karri as her own daughters, and she never hesitated to tell them so. One of Gloria’s greatest joys was becoming “Grandma Landeis” to her four grandchildren. Jason and Kim blessed her with two grandsons, Elliott and Wyatt, and Sheldon and Karri blessed her with two granddaughters, Ellie and Abby.  Her time with her grandchildren quickly became one of the most precious joys of her life.  She was their biggest fan and supporter, and they always knew that if they loved something, Grandma Landeis would love it, too.

Gloria is survived by her husband, Edwin Landeis; her children, Jason and Kim Landeis and Sheldon and Karri Landeis; her grandchildren, Elliott and Wyatt Landeis and Ellie and Abby Landeis; and siblings, Victor and Carol Fleck, Kevin Fleck, Sam (Sheila) Glaser, and Lila Zander along with numerous nieces and nephews.

Gloria was preceded in death by her parents, John and Magdalen Fleck; sister, Sheila Glaser; infant brother, Kenneth; her in-laws, Ralph and Flora Landeis; and several little angels waiting for her to come home.

To order memorial trees or send flowers to the family in memory of Gloria Landeis, please visit our flower store.