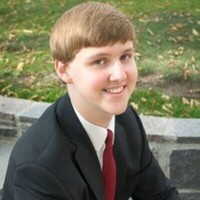 Grant Joseph Eggers, 20, Bismarck, died Dec. 3, 2020 at home. Visitation will be held from 10 a.m. to 12 p.m. Friday, Dec. 11 at Trinity Lutheran Church, Bismarck. Funeral services will start at 1 p.m. at Trinity Lutheran Church, with Pastor Mark Narum and Grant's friend, Pastor David Adams of Concordia College, officiating the services. Burial will take place immediately following at Mandan Union Cemetery. Masks are required and social distancing is encouraged. A service livestream of the visitation and funeral service will be available on the funeral home’s website, listed below. A service livestream will also be available on the church's Facebook at this link: https://www.facebook.com/trinity.bismarck/videos/194018858822599

Grant was born May 6, 2000 at Medcenter One in Bismarck to Rolf Eggers and Suzanne (Page).

Grant attended Roosevelt and Highland Acres Elementary Schools, Horizon Middle School and Bismarck High School, where he graduated in 2018.  After graduation, Grant attended Concordia College in Moorhead, Minnesota, where he was majoring in Political Science and in his third year of studies.

Grant was an accomplished musician, and his passion and aptitude for music was extraordinary. He was immensely talented and dedicated to his craft. Grant was a member of Central Dakota Children’s Choir from fourth to twelfth grade where he participated in the Bel Canto, Kantorei and Cantus Choirs.  He attended International Music Camp at the International Peace Gardens from seventh through the twelfth grade, where he participated in Chamber Choir, Pop Choir, Men’s Choir and Vocal Jazz. He was a member of the choral program at his alma mater, Bismarck High School, where he participated in the Freshman Choir, Genesis Jazz Choir, Men’s Choir, Concert Choir and New Generation Jazz Choir under the tutelage of Brian Saylor. Additionally, he sang with the tour chorus in 2017 in New York City. Mr. Saylor describes him as “a dynamic soloist and constant comedic light in rehearsal.” He also performed with the North Dakota High School All-State Mixed Choir, University of North Dakota Mixed Honor Choir, and NDACDA Men’s Choir.  Grant played the saxophone and piano and was involved in band until the tenth grade.

At Concordia, Grant performed with the Chapel Choir, the Concordia Schola, and was a choral scholar at Gethsemane Episcopal Cathedral in Fargo.  He was the Music Director for KORD Radio at Concordia, and worked as a Resident Advisor on campus, where he took great pride in creating a safe space for members of his hall.  Grant was politically active and was passionate about human rights, civil rights, equality and conservation. He carried the weight of the world on his shoulders and wanted desperately to affect change in a positive way.

More than anything, Grant will be remembered for his kindheartedness and warmth to all those with whom he came in contact. At 6’5”, Grant was a gentle giant who constantly wore a warm smile and had a friendly disposition. He was immensely compassionate, intelligent, sensitive, and patient. His morality and empathy for those around him will be the legacy he leaves to all those who ever had the distinct pleasure of knowing him. He was unwaveringly kind and spoke only with the utmost truth and care. His cognizance of the emotions and tribulations of those around him was unparalleled. The lack of his presence will be felt by many.

Grant was preceded in death by his grandparents Berit Eggers, and Donald and Sylvia Joseph.

Memorials may be given to the Central Dakota Children’s Choir, the Bismarck High School choral department and Concordia College music department.

The Eggers and Page families want to thank everyone who shared in Grant’s wonderful life. Please join Remembering Grant Eggers on Facebook to share stories and pictures of Grant.

To order memorial trees or send flowers to the family in memory of Grant Eggers, please visit our flower store.