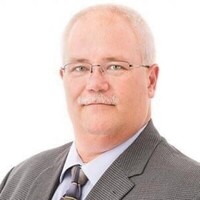 A service livestream of the prayer service will be available below starting at the time of the service. When the service becomes live, a play button will appear in the center of the black box, click the play button to view the service. With any issues, please refresh your page and/or turn up your volume. If issues persist, please contact the funeral home.

Guy Frederick Wilz, 58, passed away Thursday, Aug. 19, 2021, at his home surrounded by his family. Mass of Christian burial will be held 10:30 a.m. Monday, Aug. 23 at Church of Corpus Christi, 1919 N Second St., Bismarck. A service livestream will be available on the church's Facebook page: https://www.facebook.com/CorpusBismarck/

Visitation will be held from 5 to 7 p.m. Sunday at Parkway Funeral Service, 2330 Tyler Pkwy, Bismarck. A vigil service will begin at 7 p.m.

Guy was born in Richardton on February 17, 1963.  If you knew him, he always carried a grin and quick wit, and was ready with a joke to make people smile and laugh.  At age 10, Guy had his first encounter with true adversity when an accident forced an amputation of his left leg.  Determined to never let that loss hold him back, he developed a streak of stubbornness and a desire to be successful. Guy said, “All you got to do is say you want to do it, you can try your best, and if you don’t succeed, you know you gave 100 percent.” Guy attended and graduated from Richardton High School where he earned his infamous nickname, Eddy Fritz.  He was a three-sport athlete, a musician, an actor, and worked just a little harder than everyone else to do the things he wanted.  He would never complain or show weakness. In high school, he also developed horseman skills with the aid of his friends, Shawn and Jeff Neidhart and the Leo Aman family.  He was active with the Richardton Saddle Club, participating in team roping at regional rodeos. He always sat high in the saddle.  During his senior year he met the love of his life, Sallie Jo Bartz.  While it was not love at first sight, the two grew together as one. Until the day of his death, his dedication and love continued to show for Sallie.

Guy and Sallie were married on March 2, 1984.   They started their family in Richardton, but eventually moved to Bismarck where Guy found his niche in the auto business.  He worked to advance his experience, moving the family to Marshall, Minnesota, for a few years before returning to Bismarck where he continued in sales and finance with Cedric Theel Toyota.  Guy’s last position was as a financial associate with Thrivent Financial, a job he loved because he was helping people plan for the future.

It was in Bismarck where he and Sallie raised their children Mackenzie, Hollie, and Brady.  Some of Guy’s happiest times were watching his children play sports.  Never missing a game, from little league to college games, he loved being in the stands, where he would cheer them on, and on occasion, give the referees some grief on calls.  Guy was truly his children’s biggest fan.

What Guy loved most in life was family. He would do anything for his children and grandchildren.  He was very proud of the fact he had the first great-grandchild in the Charles Wilz clan. To the very end of his life, when he saw one of his grandchildren, he had a smile for them that said I love you and will love you forever.  The loss of Grandpa Guy from their lives will need to be rekindled from time to time by all who knew him as a wonderful husband, father, and grandfather.

Beyond his family, Guy loved so many things in life.  He loved to hunt, especially with his sons, and when he shot the biggest buck, he loved to brag about it.  He loved to fish with his children and grandchildren at the family cabin.  He loved to tinker with motors and could make anything run. Later in life he loved to ride his motorcycles, especially his Harley trike.  Guy loved to golf with family and friends and loved the fact that he could crush a ball and, on most days, after a mulligan or two, could beat his kids, his siblings, and nephews.

During his courageous two-year battle with cancer, Guy never stopped being an ever-loving husband, father, grandfather, brother, and friend. He took on each day of his battle with the motto that “Every day is a new adventure.” Whether it was spending time with family, loving his wife, or teaching life lessons, each day was truly a new experience. He taught all those he touched in his life that the power of determination makes you unstoppable.

Sallie, Mack, Hollie, Brady, and their families would like to thank family and friends for all the support over the past months.  A special thank you to close friends Rocky and Kandyce Gordon, Cornerstone Bank, Thrivent Financial and the doctors at the Mayo Clinic, Sanford Health, and CHI Hospice for their unending support.

To order memorial trees or send flowers to the family in memory of Guy Wilz, please visit our flower store.