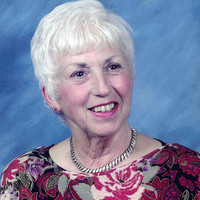 Lee was the second child of three born in Des Moines, Iowa, on July 21, 1933 to Burnett and Mabel (Hansen) Gibson.  The family moved to the Detroit, Michigan, area a few years later where Lee attended schools in Macomb county school district.  After high school graduation from Redford Union High School, Lee worked as a secretary for various companies including Chrysler Missile Plant in Detroit.  It was in the carpool to Chrysler where she met John T. Ball.  They married on July 21, 1956 at Grace Episcopal Church in Mt. Clemens.  They were blessed with two children:  Michael David and Amy Joy.

Lee and her family moved to Titusville, Florida in 1958.  This was an exciting time for them as John worked at Cape Canaveral for Martin Marietta during the early missile programs, and Lee was able to be a homemaker where she honed her baking and cooking skills, sewed matching outfits for her and Amy, and centered the family’s lives around church activities at St. Gabriel’s Episcopal Church.  Lee also loved playing bridge, as she would say, “around the clock”.

After the completion of each missile program, the family would move to another state for the next program.  This led the family to El Paso, Texas where Lee took up art classes and became a talented artist. Again, their lives were enmeshed with the church, Grace Episcopal Church.

In 1970 the family moved to Evergreen, Colorado.  Lee loved the small mountain town they would call home for the next 9 years.  Lee worked for George Kachadurian, DDS, and was the voice behind the phone and the smile behind the desk.  Lee had a sunny disposition and loved interacting with people. She was active in the Church of the Transfiguration, and later St. John Chrystostom Episcopal Church.  Lee broadened her culinary skills by trying recipes from Gourmet magazine on an almost daily basis – she wasn’t afraid to make her family her guinea pigs!  She also attended Red Rocks Community College and enjoyed continuing her education.

The next move was to Dearing, Kansas in 1978.  Lee and John bought a small hobby farm and enjoyed a simpler life.  Working in their large garden and taking care of the chickens and horses was a full-time job.  Eventually Lee began working at Coffeyville Community College as the secretary for the Dean of Students.  When John passed in 1982, Lee had the opportunity to return to Evergreen where she had fond memories.  She started working at Forest Heights Lodge as the Executive Secretary in 1983.  She was loved by everyone she came in contact with, young and old alike.  She retired in 2001 and moved to Mitchell, South Dakota to live near her daughter and grandchildren.

In 2010, she followed her daughter’s family to Bismarck, North Dakota where she resided until her death.  Lee had many hobbies including needlepoint, sewing, knitting, painting and pencil sketching, volunteering, attending the symphony, continuing education (OLLI), a member of P.E.O. in Mitchell, SD and Bismarck, Daughters of The King, and remained active at St. George’s Episcopal Church.

She was preceded in death by her husband of 26 years, John Thaddeus Ball; her parents; sister, Barbara Fairbanks; and brother, Donald Gibson.

To order memorial trees or send flowers to the family in memory of Gwendolyn "Lee" Ball, please visit our flower store.