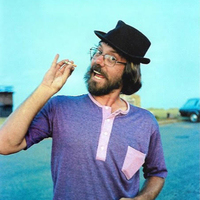 Hal was born October 16, 1948, in Billings, MT, the son of Hugh and Lillian Simons. In the early 1950s, the family moved to Bismarck, where his parents were born and raised.

He graduated from Bismarck High School in 1966, attended the University of North Dakota for one year, and then the University of Oregon for two years. Tired of college, he took a job with The Bismarck Tribune as a reporter, working there for nearly a year, before taking several cross-country trips, eventually winding up in Loveland CO, where he became sports editor for the Loveland Reporter-Herald.

Less than a year later he returned to college, graduating Phi Beta Kappa from UND in 1972.

Armed with a degree for success, he moved back to Bismarck, working briefly at odd jobs before moving to Sebastopol, CA, where, occasionally living in his car, he worked in an apple cannery for a brief time. Fed up with apple debris, he moved to Tempe, AZ, where he moved up the career ladder by working in a horrendous discount store and in a dairy (where he was strongly handicapped by the fact he knew absolutely nothing about cows).

Still clueless, he moved back to Bismarck sometime in 1973, working in a gas station, T-shirt shop, and as copy editor for the now defunct Morning Pioneer.

In 1974, he became employed by The Forum of Fargo, ND, starting out as a general assignment reporter and eventually becoming the newspaper’s political and state government reporter. He quit The Forum in January 1981, feeling burned out and pretty sure he no longer wanted to be a reporter. That thought first occurred to him months earlier when he was interviewing for a job at the Kansas City Star/Tribune and was asked what his career plans were. His response was “I’ve never really thought about it, but now that I do, it would be to get the hell out of this business as fast as I can.”

So he moved to California, where he mostly hung out on the beach, took occasional odd jobs, and played lots of tennis, honing his game, not to the point of winning, but rather to the point of losing with less alarming frequency.

Thinking a return to his roots might help him figure out what he wanted to be when he grew up, he moved back to Bismarck in late 1981. Although he never did really grow up, he became a private investigator and a process server, working mainly for law firms, until his full retirement in December, 2018. That he lasted that long in one job was not because he liked the work as much as it was that he liked working for himself, remaining steadfast in his belief that there is no future in work. Plus, there was the added bonus of being able to organize a basketball team with the name of “The Private Dicks,” well-known for losing.

As a person, he was amusing at times. He tried to be as honest as he could, but mainly he was just frank, which was often mistaken as honesty.  He tried to be true to himself, which led to a disdain for compromise and a generally stubborn, crotchety attitude. Although he tried to be aware of his many flaws, he remained an enigma unto himself as to why he could never correct them.

Moreover, for various reasons, he mostly lived inside his head from early childhood on.  As a result, he could never understand why so much time spent in self-analysis of who he was, and why he reacted to being in this world the way he did, never brought any illumination, nor did it eliminate his conclusion that he mostly likely just didn’t belong here in the first place.

He was preceded in death by his parents, Hugh and Lillian, who died three years apart on the same date, March 11. He leaves behind a smattering of friends, whose kindness and loyalty always amazed him, but he just figured there was most likely something seriously wrong with them.

So it went. You’re on your own.

Memorials may be given to Carrie’s Kids, the Bismarck Public Library (specifically for young children’s books and programs), or a charity of the donor’s choosing.

To order memorial trees or send flowers to the family in memory of Hal Simons, please visit our flower store.