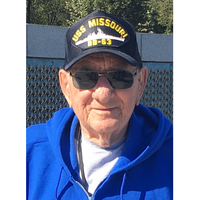 He was born in Hebron, on Jan. 19, 1933 and graduated from Hebron High School in 1952.  Shortly after graduation, Harold joined the U.S. Navy and served aboard the battleship USS Missouri seeing active duty in the Korean War.

As a Navy Man, Harold traveled the world from the South Pacific to Europe and across the equator through the Panama Canal to Mexico. His love of travel continued the rest of his life with trips to Norway, Germany, Switzerland, Alaska and to visit his ship in Hawaii.  In 2018 Harold was grateful to be included on the Honor Flight to Washington D.C. for Veterans.

After returning from service in May 1956 Harold married the love of his life, Margaret Anderson, on June 18, 1959 and remained married for 61 years until his death.

Professionally, Harold worked for the department store JC Penney’s for 35 years, retired and then worked for the Bismarck Public Schools for an additional 20 years, finally retiring in 1998.

Harold had a lifelong love of the outdoors. He had many stories of his hunting and fishing trips.   No matter the weather, he never turned down a boat ride. He spent long summers gardening in the back yard and warm winters in San Diego where he enjoyed working with his son-in-law at the San Diego Boat Show.

He led an active social life up to the very end. He enjoyed morning breakfasts with his friends and Tuesday Night Supper Club.  He was a member of the American Legion, VFW, Sons of Norway, and the Promenader’s Square Dance Club. But by far his favorite past time was working on projects with his friends. If there was a project at hand they always called Harold.

Harold found peace of mind working for hours at a time in his workshop whittling canes and mastering the scroll saw. He was very proud when people appreciated his craftsmanship. You always knew a special Christmas gift was coming from “Santa’s Workshop.”

Harold will be deeply missed by his loving wife of almost 62 years, Marge; his children, Loren (Renee), Lisa (Jim), Lara (Travis) and Lowell; as well as grandchildren, Rayce (Greta), Alexis (Nolan), Joe and Brigitte, Brett and Bryan (Jess); and his great grandchildren, Jada and Monique, Taiven and Brysten, Bryce and Logan, Bodie and Nora.

He was preceded in death by his parents; brothers, Victor and Alvin; and his sisters, Leone and Lauretta.  He is survived by his sisters Vernice and Mavis.

Funeral services will be held 1:30 p.m. Thursday, March 4 at Faith Lutheran Church, Bismarck, with pre-service visitation from 12 to 1:30 p.m. A service livestream will be available on the church’s Facebook page: https://www.facebook.com/faithlutheranbismarck/

Interment will follow at 3 p.m. at the North Dakota Veterans Cemetery, Mandan, with full Navy Honors.

To order memorial trees or send flowers to the family in memory of Harold Loritz, please visit our flower store.