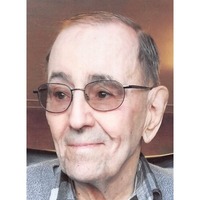 A service livestream will be available at the link starting at the time of the service: www.facebook.com/faithlutheranbismarck

Harry was born Sept. 2, 1929 in Tappen to Gottlieb and Hertha (Werre) Oster. Harry was a self-motivated man, who in the eighth grade, took the high school equivalency exam and received credit earning his high school diploma. He worked on his parent’s farm until they sold it and moved into Bismarck in 1953. He began working in Bismarck as an insurance salesman. In 1954 Harry was employed by Dakota Welding as a truck driver. With exceptional common sense, his farming experience, his consummate ability to communicate and help others, Harry was soon promoted to sales manager. Harry maintained his position until retirement.

On July 11, 1954, he married JoAnn Kinken. Harry and JoAnn had five children.

Harry was a devoted member of Faith Lutheran Church.  His strong faith was something he shared with everyone he knew. Harry had many hobbies; he won many bowling trophies, he loved fishing and camping and participated in the governor’s cup with his son Daniel and son-in-law Kevin Schneider. Harry enjoyed deer hunting and earned the nickname “many wounded deer.” He was one of the persons in charge of the pinochle tournaments at the Veterans of Foreign Wars and won the pinochle championship with Henry Olson in 2012. He was instrumental in acquiring sponsorship for Dakota Welding women’s fastpitch softball team and assisted in his son Daniel’s boxing team. He had a passion for music; he sang in the church choir, played piano, accordion, guitar and harmonica. Harry loved dancing and winning polka contests with his sister, Irene. He was a lifetime member of the Eagles Club.

The Oster family would like to send a big thank you to the staff and caregivers at the Missouri Slope Lutheran Care Center. All of them knew him well because he would introduce himself to them by saying, “Harry Walter Oster, Tappen, North Dakota.”  He would also greet others with “Bingo, Bongo, I don’t want to go to Congo.”

He will be deeply missed by all the people whose lives he has touched.

Following the burial service there will be a luncheon at the Eagles located at 313 North 26th Street, Bismarck.

Visitation will be held from 4 to 6 p.m. Wednesday at Eastgate Funeral Service, 2302 E Divide Avenue, Bismarck, with a prayer service at 6 p.m.

Burial will be held at the Fairview Cemetery, Bismarck.

In lieu of flowers, the family would prefer memorials be sent to the North Dakota Veterans Cemetery, Mandan, or Faith Lutheran Church, Bismarck.

To order memorial trees or send flowers to the family in memory of Harry Oster, please visit our flower store.