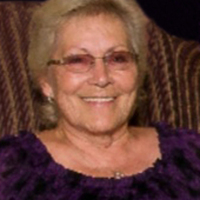 Ilene Schmidt, 78 years young, Bismarck, earned her wings and went to her new home in Heaven on Feb. 19, 2021 at Baptist Health Care Center, Bismarck. A memorial service will be held 1 p.m., Wednesday, Feb. 24 at Eastgate Funeral Service, 2302 E Divide Ave, Bismarck, with Greg Runyon officiating. Committal will be held 3:30 p.m. at Fisher Cemetery, Tappen, with a light lunch at Tappen Hall to follow.

Ilene was born March 8, 1942 in Jamestown, the second of five daughters to Samuel and Freida (Geist) Schmidt where her parents farmed in rural Tappen.

She received her education at Tappen grade school, Kidder county country school and Ely, Minnesota, high school. She attended youth fellowship in Tappen and was confirmed in Ely, Minn.

Growing up she worked on the farm milking cows, babysitting, as a nurse’s aide and at a Resort in Babbitt, Minn.

Her family later moved to Michigan, N.D. where she met and married Kenneth Olson on Sept. 2, 1962 at Michigan Lutheran Church.  They raised their four children and moved about North Dakota because of Kenny’s job as a crane operator.  They later divorced after 14 years of marriage.  They continued to co-parent their children and remained friends.

Ilene enjoyed gardening, crocheting, playing cards and pool, crafting, and baking.  She always said she was a jack of all trades and master of none.  She waitressed, did secretarial work, upholsterer, sold Mary Kay (even met the Mary Kay in Texas), sold TriChem and worked retail among various other jobs.

Ilene knew no stranger and could strike up a conversation with anyone, then part ways gaining a new friend. She was kind, loving, spunky, sassy, strong, independent, caring, funny and so much more.

She moved about between North Dakota and North Eastern Minnesota throughout her adult life.  She later settled within the Bismarck/Mandan area in the 1980’s.

Her pride and joy were her children, grandkids and great-grandkids.

She was preceded in death by her husband; son, Kevin; grandson, Devon; her parents; brothers-in-law, LaRue (Bud) and Jess Jr (Dub); along with several great-grandchildren lost during pregnancy.

To order memorial trees or send flowers to the family in memory of Ilene Schmidt, please visit our flower store.