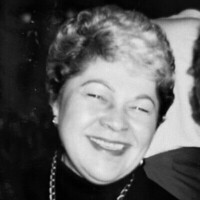 Irene Sundstrom passed away peacefully after a short battle with Covid on July 22, 2022, at the age of 90, at the St. Vincent’s long-term care facility in Bismarck, North Dakota.  Her battle with memory issues in recent months showed her tenacity and courage in facing life challenges with a smile and her trademark sense of humor.

She was born on January 16, 1932, in McHenry County, North Dakota, to George and Johanna Gange (Black).  She was the eighth of ten children.  Named at birth Bridget Irene Gange she insisted from a young age that she be called by her middle name Irene following a nicknaming incident of two brothers who called her “bird sh&t.”  After graduating from Karlsruhe High School, Irene attended Minot Business College, which laid the foundation for her long and successful career as an administrative assistant and paralegal.  She worked for many years at Bayliner in Moorhead, Minnesota, and then relocated to Fairfax, Virginia, where she worked for more than two decades for various law offices and title companies.  She enjoyed the D.C. area and was a gracious hostess to family and friends who often came to visit and take in the sites.

Irene was the proud mother of two sons, Marc and Paul Sundstrom.  They were the light of her life and she enjoyed spending time in the kitchen preparing their favorites, which included her renowned scalloped potatoes.  Irene loved spending time with her large extended family sharing memorable and most-often-times hilarious stories about growing up on the family farm.  Delicious homemade German food and playing hand after hand of pinochle and whist were the mainstays of all family gatherings.

She had a natural effervescence and was always impeccably and fashionably dressed, perfectly accessorized by the bright smile on her face and mischievous twinkle in her eyes. Her great sense of humor and knack for storytelling became legendary.  For years Jo-Jo, her precious gray poodle and constant companion, also perfectly groomed right down to her purple toenail polish and matching hair bows, accompanied Irene.  You knew they were close when you heard the click-click of Jo-Jo’s nails on the floor.  This meant great conversation and hours of fun and laughter were just around the corner.  She was a devoted mother, sister, and favorite aunt.  She was very dearly beloved and will be sorely missed.

Irene was preceded in death by her son Paul, her parents, her sisters Agatha Volk, Kay Bucholtz, Richardina (Jean) Wald, and brothers Carl, George, Ray, Emanuel, and Anthony (Tony) Gange.  She is survived by her son Marc of Fargo, North Dakota, her sister Diana Bergren of Dallas, Texas and many nieces, nephews, great-nieces, and great-nephews.

To order memorial trees or send flowers to the family in memory of Irene Sundstrom, please visit our flower store.