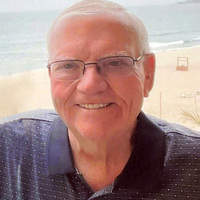 Irvin A. Smith III, 82, Bismarck, passed away unexpectedly on May 12, in Bismarck surrounded by family.

Irv was born May 14, 1939, to Irvin and Geneva Smith.  He was passionate about his family and known for his quick wit and humor.

Irv graduated from Bismarck High School in 1957. After graduating, he served in the U.S. Marines Corps for 3 years. He received a bachelor’s degree in 1964 from Valley City State University where he played football and was inducted into the football hall of fame. He also received a Master of Arts degree in 1967 from the University of Redlands, CA. He taught English and coached football at the secondary level and college level. Over the years Irv had many accomplishments, lived in many places in the U.S., and had several successful careers. He worked as a salesman in Las Vegas and served as the Deputy Insurance Commissioner for North Dakota for 4 years. In his last endeavor, he was a successful stockbroker for over 25 years, semi-retiring from Wells Fargo Advisors in 2005, and fully retiring several years later. Over the years he was involved with countless organizations and served on many boards. Girl Scouts, Medora Foundation, ROTARY Club, a Lifetime Member of the Bismarck-Mandan Elks Lodge, President of the BSC Alumni association, and Dakota Stage Board, just to name a few.

He loved to read—he was always quoting from a book or adding facts to a conversation. He could talk to anyone. If he sat next to a stranger, he would walk away knowing their parents’ names, their education, and what they did for a living. He loved attending activities and sporting events. Never a dull moment with humor, wit, and stubbornness. He loved to get reactions out of people.

In the summer of 1983, he met Marsha Soma, always referring to her as “hot babe”. The two got married that fall and spent 38 years together.  They traveled extensively, favorites being Hawaii; Naples, FL; Napa, CA; and Mexico. Taking trips with family was his favorite. Mexico with all the grandkids, friends, and extended family for a vow renewal, NASCAR in Vegas with his son Travis, and most recently taking his youngest granddaughter to Disney World. Irv’s grandchildren were his world. He was the most doting Papa. Attending activities, trips to Barnes and Noble, movies, zoo trips, and lots of sleepovers.

Irv is survived by his wife, Marsha; his son, Travis (Danielle) Smith; grandchildren; Brandon, Alec, and Harper; and lots of nieces and nephews.

He was preceded in death by his parents; grandparents; in-laws; and brothers; Tom and Joseph (Louella) Smith.

To order memorial trees or send flowers to the family in memory of Irvin A Smith, please visit our flower store.