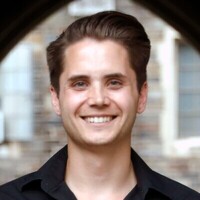 Jack David Greenwood passed away on November 23, 2020 in New York City where he resided. Jack was born in Bismarck on September 27, 1990 and attended Solheim Elementary, Wachter Junior High, and Bismarck High, graduating in 2009. After attending Bismarck State College for a semester, he enrolled in the McNally Smith College of Music in Saint Paul, Minnesota, graduating in 2013 with a Bachelor’s Degree in Music.

Music was Jack’s lifelong passion. He started drum lessons in the third grade, and performed in school bands and small groups at Wachter, BHS (where he was a loud and proud member of the Screamin’ Demon Marching Band drumline), BSC, and McNally Smith. He also made music outside of school with many friends in Bismarck and performed with bands in the Minneapolis metropolitan area while in college.

As part of a program in college that gave after school music lessons in churches in St. Paul, he discovered his other passion, teaching music to elementary school students.

After college, Jack lived in Colorado Springs, CO where he played with a country band, a rock/blues trio, and a 12-piece show band, performing in venues ranging from bars in the Black Hills to hotel ballrooms in Vail, CO. But it was in New York City that he realized his dream by finding a balance between being a working musician and a musical educator. He worked for Musical IQ, which provides music education for young children in all five boroughs of New York City and tri-state area elementary schools and youth centers. Jack truly cherished working with kids. He was also a member of the band Hello Brooklyn, having residencies at venues from the financial district of NYC, all the way out to the Hamptons, and playing many large-scale events and weddings. The band members quickly became his NYC family.

Family was important to Jack and he is survived by his mother Cleo and his father Alan, sisters Leah (Portland, OR) and Eden (New York, NY), his grandmother Lorraine Greenwood, extended family Dawn, Sarah, Scarlett, Jayden, Matt, and Trevor Flanagin, many aunts, uncles, cousins and close friends. He will be deeply missed by all that knew him. He was preceded in death by his grandparents George and Adeline Bohlin and his grandfather Don Greenwood.

Jack’s heart was too soft for this world and he left us way too soon. A funeral service will be handled by Eastgate Funeral Home and a public celebration of his life will be held on June 5, 2021 at Good Shepherd Lutheran Church in Bismarck.

To order memorial trees or send flowers to the family in memory of Jack David Greenwood, please visit our flower store.