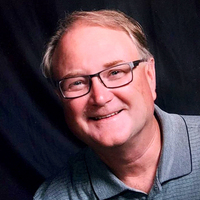 A service livestream will be available for viewing at Good Shepherd's Facebook page at the following link:

The family will receive friends from 5 to 7 p.m. Tuesday, Nov. 23 at Parkway Funeral Services, 2330 Tyler Parkway, Bismarck. A prayer service will follow at 7 p.m.

Memorials may be left to the discretion of the family.

Growing up in Dilworth, MN, James graduated from Dilworth High School in 1975 and later the University of North Dakota (UND). On October 11, 1980, he married Carla Pleinis. To that union, two sons were born.

When he wasn’t with family, especially his five grandchildren, James enjoyed spending time outdoors fishing, hunting, sport shooting, and golfing. He worked for GFG/US Foods for more than 30 years, first in Grand Forks and later in Bismarck.

He was preceded in death by his father-in-law, Herb Pleinis.

To order memorial trees or send flowers to the family in memory of James Craigmile, please visit our flower store.