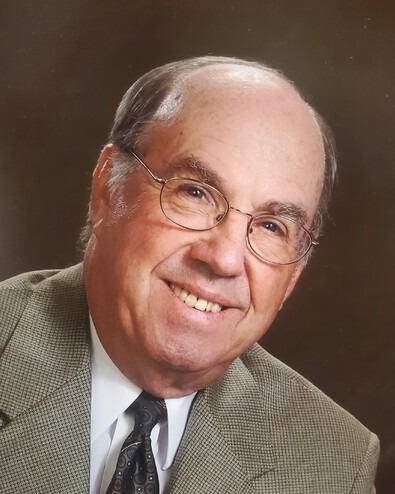 Please use this link to view the service livestream: https://www.facebook.com/CorpusBismarck/

Visitation will be Wednesday, December 21, 2022, from 5:00 – 7:00 p.m. at Parkway Funeral Service, 2330 Tyler Parkway, Bismarck, where a vigil service will begin at 7:00 p.m. Visitation will continue on Thursday, one hour prior to the service at the church.

Inurnment will be at Calvary Cemetery, Toledo, OH.

James was born August 15, 1932, to Anthony and Cecilia (Merritt) Fleig in Toledo, OH. He was raised and educated in Toledo and graduated from the University of Toledo. During high school and college, James was employed with Sears, Roebuck and Co. where he met and later married Sally A. Adler on April 15, 1953. During the Korean War, James served overseas as a company clerk for the United States Army. Upon his return, James completed Sears executive training and he and Sally began their family. Three boys soon followed.

As James excelled in his professional career, Sears promoted James and moved the family from Toledo to Lexington, KY; Brookfield, WI; Janesville, WI; and lastly, in 1979 to Bismarck, ND.

In the mid-1970s, James and his family lived in Janesville, WI, where James became the Sears store manager in downtown Janesville. James also served as a member of the board of directors for the Janesville Chamber of Commerce. He and his wife, Sally, soon took up golf and became active members of the Janesville Country Club.

His strength was mentoring individuals he met along the way and encouraging them to expand upon their talents and education to achieve their future career goals, much as he himself had done. “He was an excellent, living example of ‘what to do’ in life,” a business associate said.

James wasn’t about to retire upon completing his 40+ year career with Sears. So, he, along with his partners, created a catalog company. Branded as Dakota Creations, this endeavor soon evolved into the state’s first catalog featuring North Dakota made products. “Chokecherry products were annual best sellers and rapidly sold out,” James said.

James, and his fellow golf partners, also established the original structure affectionately known as “the Dome.” It is now currently known as the Fore Seasons Center which is owned and operated by the Bismarck Parks and Recreation District.

As members of the Apple Creek Country Club in Bismarck, James and Sally enjoyed many rounds of golf together and made many valued friends; James also served on the board of directors and became president of the organization.

Over the years, James became an accomplished, state championship golfer. He shot a hole-in-one on five separate occasions. He was the 1999 North Dakota Golf Association (NDGA) Super Senior Match Play Championship Champion. In 2000, he was the NDGA Senior Match Play Championship Palmer Division Runner-Up. In 2001, he achieved the title of Apple Creek Big Apple Champion. In 2002, James was inducted into the North Dakota Golf Association Honorary Hall of Fame.

In later years, James enjoyed playing golf with his friends at Prairie West Golf Club in Mandan, ND. “Gentleman Jim was always calm and classy,” his friend “Doc” said. “A class act,” his friend Tom seconded. He hit the ball well, played consistently and always tossed in a few words of encouragement for his fellow players. When the round ended, he enjoyed time with his friends on the patio at the golf course, or at their favorite table at The Lodge, where details of the day’s game played out in bursts of laughter, counting of points and phrases like “come on, now” as each player negotiated their takeaway and future pecking order. There was no shortage of fun-loving “trash talk” among these golf brothers; the kinship was real.

James was competitive, strong-willed, compassionate and quick to give encouragement. He’d get you to laugh at yourself and lift your spirits when you needed it. “He was the best sales manager I ever had,” a previous Sears employee said. He balanced discipline, structure and follow through, with making friends and fostering positive relationships. Through it all, he always expressed his gratitude to others and maintained a grateful heart for all of his life’s blessings.

The family wishes to give special thanks to the staffs of the Sanford Health Roger Maris Cancer Center in Fargo, ND, the Sanford Medical Center in Bismarck, ND and the CHI St. Alexius Health Bismarck Medical Center for their kind and loving care. And, to church liaison, Tammy Schafer of the Church of Corpus Christi.

Memorial contributions may be made to the Church of Corpus Christi Poor and Needy Fund.

To order memorial trees or send flowers to the family in memory of James Fleig, please visit our flower store.