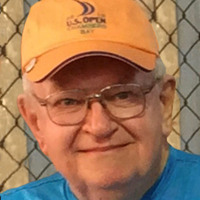 James Joseph Kuntz, Bismarck, passed away Saturday, February 13, 2021 in Mesa, Arizona, at the age of 78, after a long five week battle with Covid-19.

A graveside service will be held 11 a.m., Monday, June 14 at the North Dakota Veterans Cemetery, Mandan.

Visitation will be held from 1 to 3 p.m. Sunday, with a 2 p.m. prayer service at Parkway Funeral Service, 2330 Tyler Pkwy, Bismarck.

Jim was born on January 27, 1943 in Dickinson to Roman and Rose Kuntz. He attended Dickinson High School and Dickinson State University. On February 6, 1995 on a golf course in Parker, Arizona, Jim married the love of his life, Margaret (Carley) Kuntz. That’s when Margaret knew if she wanted to spend any time with Jim, she better learn how to golf. Jim and Margaret enjoyed many years of traveling to golf courses in North Dakota, Minnesota, Florida and Arizona with friends and family. Jim retired from Job Service North Dakota in Bismarck. He also served proudly in the ND National Guard from which he retired as a Lt. Colonel. After retirement, Jim and Margaret purchased their home-away-from-home in Mesa, Arizona, where they spent their winters.

Jim spent his summers at his lake cabin on Blue Lake (ND). He loved gardening, reading and telling stories and jokes around the campfire with the Reuer’s. During the winter months in Arizona, he loved to golf, visit with neighbors and always helped out when he could. He spent a lot of time making handmade rosaries with the nuns at the Catholic Church and giving rides aboard a novelty choo-choo train through the streets of his retirement community. In any season Jim spent much of his time building close friendships.

While always a frugal man with money, Jim was not well-known for his economy with words. Brevity escaped him. He never met a stranger with whom he didn’t want to have an hour-long conversation with. He could tell long, meandering stories – often with several subplots – before arriving at the (usually rewarding) crescendo. Belly laughs – sometimes to the point of tears – would often ensue.

To order memorial trees or send flowers to the family in memory of James Kuntz, please visit our flower store.