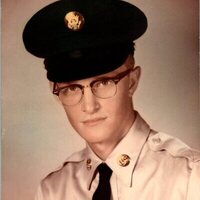 Visitation will be held from 5 to 7:00 PM, Friday, August 12 with a rosary/vigil service starting at 7:00 PM at Parkway Funeral Service, 2330 Tyler Parkway, Bismarck.

Burial will be held at St. Anthony Cemetery, Linton, ND.

James was born on July 5, 1943 to John A. and Rose (Volk) Vetter. He was raised and educated in Linton, ND. In his early years, he attended a one room schoolhouse where he also learned English as German was his first language.

In August of 1963, James joined the National Guards. He did his basic training at Fort Belvoir, Virginia while attending college. He graduated from Valley City State University with a degree in Elementary and Jr. High Education in 1967 and began teaching in Glenburn ND.

During his time of service, James’ unit was deployed to the historic Zip to Zap event. He was honorably discharged 1969 and in that same year he married Loreli (Gerving) Dykema. He continued teaching in Glenburn until 1972 then became the principal for the elementary and jr. high in Flasher for two years. He went on to Ryder Elementary school where he was the principal for four years.  James put aside his career in education and moved to the Bismarck/Mandan area where he worked at United Auto Parts, Cloverdale, as a farmer and Walmart until his retirement in 2001.

James loved to take care of his garden, plant trees and watch wildlife on his property, he especially loved to fish. He was a member of the Eagles where he undoubtedly shared tips with his friends about fishing and gardening.

In lieu of flowers donations can be made to the Dakota Zoo, Bismarck.

To order memorial trees or send flowers to the family in memory of James Vetter, please visit our flower store.