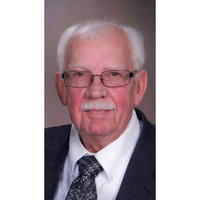 James L. Wiedrich, 81, Bismarck, passed away peacefully at Sanford Health on May 4, 2022, surrounded by loved ones.

Funeral services will be held at 11 a.m. Tuesday, May 10 at McCabe United Methodist Church, 1030 N Sixth St, Bismarck. A livestream of the service will also be available for viewing on the church's website: https://www.mccabechurch.com/livestream/

James was born August 29, 1940, in Hazen to Oscar and Emma Wiedrich. After graduating from Hazen High School in 1958, he worked at the Hazen Bank. In 1964, he married Hope Voeltz. They moved to Minot and then Grand Forks while Jim attended college. He graduated from the University of North Dakota with a Bachelor of Science degree in business administration. In 1969, they moved back to Minot where he worked as an accountant with Weber Spaulding.

There he met his future business partner and friend, Tom Probst; he then went to work at Dakota Beverage. In 1977, they had an opportunity to start their own beer wholesale business, Premium Beverages in Bismarck. Jim and Hope moved the family to Bismarck where he enjoyed 28 years in the business until his retirement in 2005. Throughout those years, Jim and Hope enjoyed traveling and made many lasting friendships.

Jim enjoyed casino trips, spending time at the cabin with family and friends, fishing and boating, playing cards. When family would get together, there was always a spirited game of backstreet (bridge) to be had. Jim was admired for his kindness and humor; he was always ready with a witty comment. He was the one people went to for advice and was always willing to lend a helping hand. He had a laid-back attitude and didn't let the little things bother him, his favorite saying was, "That's life."

Jim's passion was spending time with his family. He cherished his role of "papa" to his two granddaughters. He was steadfast in his faith and a member of McCabe United Methodist Church. He was a loving husband to Hope, taking care of her in her final years. We take comfort in knowing that they are together again.

He was preceded in death by his wife of 54 years, Hope; his parents; father-in-law and mother-in-law, Walt and Lavonne Rosenow; one sister, Loretta Link; two sisters-in-law, Ferne Richardson and Luanne Rosenow; two nephews, Stacey Grosz and Zachery Voeltz; one niece, Brooke Boon.

Memorials may be made to McCabe United Methodist Church in Bismarck in James’ name.

To order memorial trees or send flowers to the family in memory of James L. Wiedrich, please visit our flower store.